Photo courtesy of Teresa A Anderson

The Easton gas station in 1922. This photo is part of the Dan Plouse collection.

Teresa A Anderson and I have been continuing to follow her father's travel journal from May 29, 1922. Herbert Anderson and Elias Gillette had driven from Queen Anne to Leavenworth on May 29, 1922, and returned via the Great Northern Railway through Edmonds on May 30, 1922.

We have previously been to the three brick roads they drove that still exist, which date from 1913. One of those was the North Trunk Road that connected Seattle to Edmonds.

Our recent travels have taken us to old Blewett Pass, Cle Elum, and Easton. Our adventure to Easton turned out to be unique. We had a travel journal entry indicating the car in which Elias and Herbert were traveling had a flat tire 2 miles west of Easton.

They put on a spare and drove to Easton. They arrived in Easton at 3:10. A gas station in Easton repaired the tire, and they were on the road again by 3:25.

We also had a photo. Elias is in the photo with 3 unidentified men. One of them is working on the front left tire. A sign at the gas station says "free air." The building beyond has a sign, "Hotel Easton."

We went looking to see if the Hotel Easton still existed. As we drove into Easton, there were more buildings and houses than I expected. Since Easton is no longer a major railroad location, and I-90 bypasses the town, the population has declined from a peak of about 2,000 to about 300 now.

Our goal was to find the Hotel Easton if we could. As we drove east on Railroad Street, the main street in town, we saw an old railroad passenger car. I parked so we could look at it.

Teresa stayed taking pictures, and I wandered back out to the street to look around. There, across the street, was a building that seemed familiar. As I looked at it, I realized that the windows had been moved and replaced, but the old locations were evident and matched exactly the window placement of the Hotel Easton in the 99-year-old photo.

As I was standing there comparing the photo to the building, a man and his elderly, overweight, but very friendly cocker spaniel, walked up to me and asked, "Are you trying to find something?"

I showed him the photo and asked if that building had been the Hotel Easton. The answer was "yes," and his grandfather had been the owner of the gas station that no longer existed next to it.

He asked if we had some time, which we did. He wanted us to meet his brother who has been trying to get a historical group organized in Easton. We went to his brother's home in the old fire station where he showed us dozens, maybe over 100, historic photos of Easton. 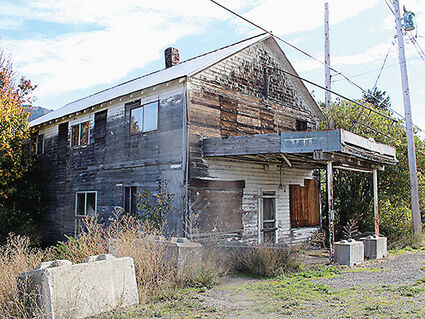 Photo courtesy of Teresa A Anderson

The former Easton Hotel as it looks today.

Several photos were of their grandfather's gas station. Two of the photos showed the same "free air" sign that is in the photo we brought

with us. Other photos showed how the station changed over the years.

We came home with photos of photos of Easton, and will be going back with a scanner to digitize the photos for history. The task now will be to get accurate information to attach to each image.

When we set off to find a location that Teresa's father had visited 99-plus years before, we had no idea of the adventure in serendipity that would ensue.

We do have at least one more thing that we are trying to learn from the trip to Easton.

Does the photo have enough detail that a car expert can identify the make, model, and year of the car they drove to Leavenworth?