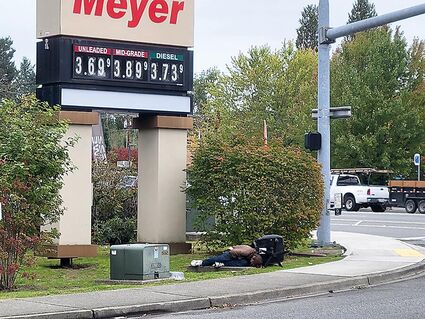 A homeless man lies by the intersection of 132nd St. SE and 16th Avenue SE in front of Fred Meyer.

Editor's note: This is the second in a two-part series on the growing challenge of homelessness in Snohomish County.

Homelessness has become an increasing issue in Snohomish County, and with more people on the street in recent years, local governments are left to figure out the root of the cause and how to best address it.

According to a 2020 report from the Snohomish County Human Services Department, a point-in-time (PIT) count of homeless people living in the county on a single day tallied a total of 1,132, the highest it has been since 2012.

A reported 673 individuals were unsheltered at...