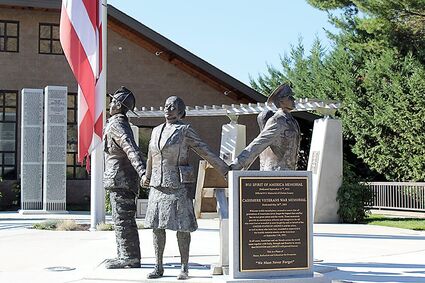 The 9/11 Spirit of America Memorial in Cashmere, Wash. includes a firefighter, office worker, and an airline flight attendant, in addition to pieces of the World Trade Center and Pentagon. It was created by John Jackson and originally intended for Olympia, which did not want it.

Earlier in August, The Beacon asked readers to share their own experiences of the events of 9/11 in advance of the 20th anniversary of the attacks.

In horror, I watched

I was working as an independent contractor for a company located in Greenwich, CT.

I was passing through the building lobby when I saw the TV broadcast of the first plane that crashed into the WTC. My first thought was that it was an errant plane that lost its way.

Then, in horror, I watched the second plane crash into the tower. Instantly, we all knew it was a terrorist attack. I lived in New Jersey at the time. Will I be able to get home? As I was crossing the Tappan Zee Bridge, I heard the radio broadcast of the Towers collapsing. Enough said.

In sadness, there is hope

I was living in Brooklyn, where I was raised, serving as an ELCA Lutheran pastor in my home congregation. One of our members was killed at WTC 1. I volunteered as a chaplain with the Red Cross at their Family Assistance Center, and later at St. Paul's Chapel, the respite site for the police, firefighters & construction workers, one block away from Ground Zero. I moved back to Seattle/Edmonds, where I previously served for 22 years.

I cry without warning, & that's OK. I think I'll always have a layer of sadness hovering over me, but as a person of faith, that sadness is always couched in hope.

I am buoyed by the love, support, and prayers from friends.

A day of destruction

Sept. 11, 2001, was the day of destruction ... in my kitchen. It was the first day of remodeling my kitchen which included removing and replacing my counter and destroying the backsplash.

There was a lot of activity deconstructing my kitchen while we all watched and listened to the attack and destruction happening in New York.

The two events will always be a combined memory.

United: Becoming an American citizen after 9/11

We were visiting my parents in the U.K. with our then 9-month-old son.

We had been out for a walk that morning, and were met at the front door by my Dad, who said, "You'd better come in and sit down." I'll never forget the look on his face.

We were horrified and confused by the images on TV, not really grasping what had happened. As the next couple of days passed and clarity began to set in, our thoughts turned to how we were going to get home, as I was due to be sworn in as a U.S. citizen on Sept. 19, and all air travel was restricted.

We did make it back. I became a citizen, and every word of the oath I took that day hit like a hammer in my heart.

I love this country and what it strives to be. We were united that day.

We held our silence on this horrible day

Like many West Coasters, I woke on the morning of 9/11, turned on the TV, and was stunned by the unfolding horror. The first thing I did after the first tower fell was to call my job and tell them I would not be in that day. I was flooded by memories of my time spent in that complex and New York City just a few years prior.

An hour later, I was on a ferry headed to Vashon Island on my way to visit a fellow New Yorker while lost in memory. My old boss, Larry at 7 World Trade Center, who ran a magazine stand; the times I took my friends up to the observation deck ... I was a New York City resident for 12 years up until 1999.

I took a training day once in 1992 on the 89th floor of 2 World Trade Center, learning to operate a NY State lottery machine for my job. I remembered feeling the floors were kind of bouncy.

On this horrible day, I wanted to talk to someone about all this. But even though it was a beautiful day in Seattle on Sept. 11 and everybody on the ferry boat was out on the sundeck, nobody was talking to each other, nor even making eye contact. I held my silence too and just watched the water.

The world will never be the same

On 9/11, I worked for Continental Airlines (now United) as the Director of Air Traffic, at the airline's Newark Hub, just a few short miles from the World Trade Center (WTC) in New York.

My duties included liaison with the Federal Aviation Administration (FAA) relating to air traffic movements. On the New Jersey Turnpike en route to the airport, smoke was visible from one of the WTC Towers. 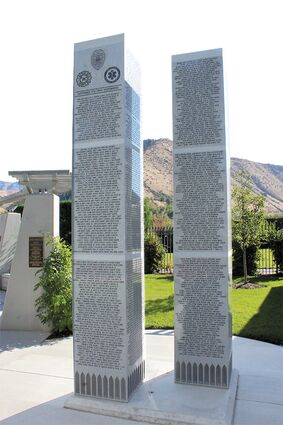 A replica of the Twin Towers at the memorial in Cashmere. The names of the victims who died in the towers are engraved on the replica.

About 30 minutes later I was in our company facility immediately adjacent to FAA's Newark Control Tower with a clear and unobstructed view of the WTC Towers across the Hudson River.

The south WTC Tower appeared shrouded in dust and debris moments before it began to collapse, gaining speed as the horrifying process continued. The thought of the loss of life as it occurred was, and to this day, incomprehensible and indescribable. At that moment, I made the incorrect comment to my employees:

"...from now on there will only be a single World Trade Center Tower..."

An FAA controller remarked to me, "Les, the world will never be the same."

How right he was.

The events that followed that day were no less astonishing as they remain 20 years later.