What type of hawk is it? 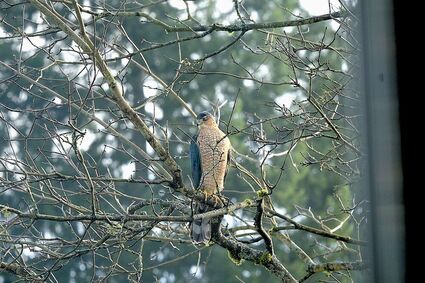 This hawk was viewed in the backyard of Martin Finney's home in unincorporated Snohomish County near the Mays Pond area; it may be a Cooper's hawk or a Sharp-Shinned hawk.

When Martin Finney saw a bird through his East-facing window in Mays Pond, he immediately took photos and went to work figuring out what kind of hawk he was seeing.

"They're threatened, so it's important for people to be aware" that they migrate here, Finney said.

His guess was a Sharp-Shinned hawk, but he said the likeness to a Cooper's hawk makes it difficult to tell. The viewing led to a half-day email-conversation with his sister, Kathryn Thomas, who lives in Port Ludlow. Both struggled with the identification as they viewed the photo.

She guessed that it was a Cooper's hawk.