Leaders respond to rioting and violence in Washington D.C.

Story will be updated as additional comments come in, from local leaders 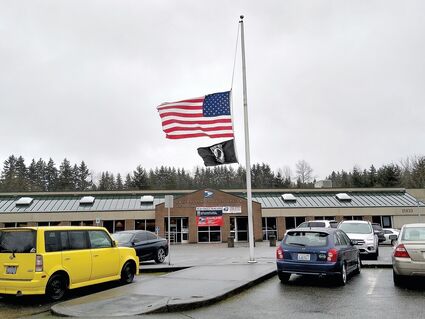 This half-staff flag at the Mill Creek post office Jan. 12 is to honor two fallen officers, in D.C. The flag status was at the direction of Gov. Jay Inslee.

The storming of the nation's Capitol on Jan. 6 has created indelible images in the minds of all who saw them. Local leaders are being contacted, and their comments collected from social media.

Rep. John Lovick, (D-Mill Creek) said there are things "that we won't ever forget" about the images in D.C., from Jan. 6. He mentioned one officer flinging his nightstick in a crowd of other police officers, with people pursuing them. People were "taking clubs and sticks and breaking into Capitol windows, and then were walking through our nation's Capitol with a Confederate flag."

Gov. Jay Inslee posted on social media that he was honoring fallen officers on Jan. 12: "Today, I directed that Washington state and US flags at all state agency facilities be lowered to half-staff immediately, in honor of fallen US Capitol Police Officers Brian Sicknick and Howard Liebengood, and all Capitol Police officers and law enforcement across the nation."

The flag at the US Post Office in Mill Creek was half-staff on Jan. 12.

Lovick struggled for the word he wanted to use to describe the rioters who harmed police, stormed the White House, and damaged iconic items at the US Capitol on Jan. 6 and then found it: "These were domestic terrorists."

Lovick made a distinction between a protest and what happened in D.C.

"Peaceful protest is something that we all respect. We have a right to do that," he said.

Everett Public Schools Superintendent Ian Saltzman is immersed in plans to provide onsite instruction for a small group of students, starting Jan. 19. Those plans are still in place.

Saltzman took time to talk to the Beacon about the Jan. 6 riot in D.C.

"It was very troubling to (watch) events unfold in our nation. Regardless of everyone's political party, we come together for the sake of our children and our democracy," Saltzman said.

In usual times, kids would be onsite, at school, with an opportunity to discuss current events. Students are often guided by educators, as they process history unfolding before them. Most are home now, so when asked how adults should help kids process Jan. 6, Saltzman said, "Let your kids talk. That's the key; let them talk."

Snohomish County Councilmember Jared Mead, a Mill Creek resident, emailed a comment about the riot: "It's not about some broken windows and stolen memorabilia. ... Rioters breached our nation's Capitol with the intention of intimidating our elected congress to stop the certification of a free and fair election. The most time-honored and sacred tradition that keeps our country free is the peaceful transfer of power every four or eight years. If we don't protect that, we will watch our fragile democracy slip away."

On Tuesday, Jan. 12, Mayor Pro Tem Stephanie Vignal commented on the Jan. 6 riot. She said she needed some time before making a statement.

"I was heartbroken and shocked to watch the insurrection at our nation's Capitol on Jan. 6. The right to peacefully protest is an important foundation of our democracy, but the events at our Capitol went beyond peaceful protest. Our democracy relies on our democratic norms and institutions. We must not allow violence to interfere with our duly elected legislators fulfilling their constitutional duty. I want to thank our leaders for their service and determination to go back to the floor that evening and complete their constitutional obligation for our country."

A count of police and other law enforcement at the Washington state Capitol, on its first day of the session on Jan. 11, has been requested from the Washington State Patrol as a comparison. In D.C. on Jan. 6, police appeared to be a minimal presence during the arrival of crowds. 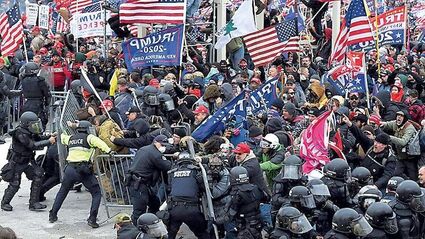 Police battle rioters at the U.S. Capitol on Jan. 6.

For tactical reasons, he said exact numbers will not be released until after the drawdown is complete. By Wednesday, the situation was described as calm. He said all eight of the geographic districts across the state were represented.

Editor's comment: Mill Creek readers are also welcome to comment on what happened Jan. 6, in D.C. Send letters to the editor to [email protected]