Project clears the way for salmon habitat in Mill Creek 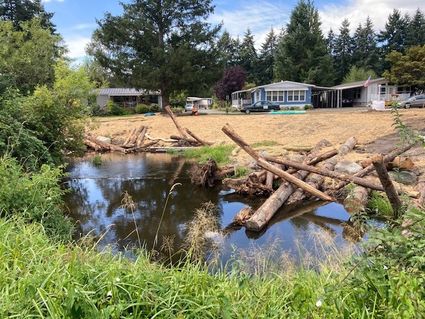 A project in Redmond will benefit Mill Creek salmon habitat.

Bear Creek may not have looked like the center of construction activity in the city limits, but the work going on in Renton from Aug. 25 to Aug. 27 is sure to impact salmon habitat in Mill Creek.

The Adopt-A-Stream foundation (AASF) was busy in that stretch of time, adding logs and "six-man rocks" to a part of the stream located in the 18000 NE block of Redmond, in Bear Creek, said Tom Murdoch of Adopt a Stream in Mill Creek.

The items that seem to create clutter are making a better place for the Chinook by adding pools, slowing the streamwaters.

"They can hunker down where he velocity is" less, he said. Murdoch said AASF is installing "habitat for adult salmon returning into Bear Creek and juvenile that we'll be seeing later."

The logs installed last week were anchored by boulders, and side channel pools were created by a team that included an ecologist, as well as technicians and interns.

The project came at a time when the fish need help.

"North Creek still has all fish but numbers are way down," Murdoch said.

He said in the past people viewed logs and branches as problems in a stream, and removed them. Now it is known that logs and branches create pools with slower waters where the salmon can find a place to rest, Murdoch said.

Trees planted near a stream can also help, because they cool the water. This fall, Chinook salmon will swim up through the Ballard Locks fish ladder to Lake Washington and continue their journey upstream to the Sammamish River.

Many will migrate further into Bear Creek, a Sammamish River Tributary next to Redmond, on their way upstream into Snohomish County. During this upstream migration, the returning salmon will seek refuge behind fallen logs and stumps in the stream to rest before moving further upstream.

Construction often leads to removal of the forest clutter that keeps salmon thriving. AASF added more than 100 logs anchored by huge boulders during the project. The activity occurred where Bear Creek flows through the Friendly Village Community, in an area managed by the King County Housing Authority.

AASF also has plans to widen the floodplain and create side pools. Juvenile salmon need a rest when they begin their journey back downstream to Puget Sound in late spring and early summer next year.

AASF Ecologist and Technicians are being assisted by 5 interns. This fall, the "stream team" will be planting a forest next to Bear Creek to provide shade, and keep water cool.

The restoration project was funded by a do-nation from the Bear Creek Watertenders, and a Salmon Recovery Funding Board grant administered by Washington's Recreation and Conservation Office (RCO), in partnership with the King County Housing Authority.