City: Complaint is 'unnecessary and serves only to increase the City's legal fees' 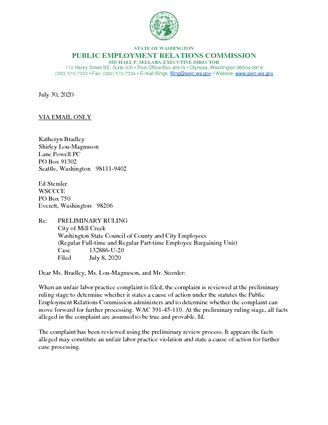 A preliminary review from the Public Employment Relations Commission has found that if the union's allegations are true, then the City's actions may be unfair.

A preliminary review by the state Public Employment Relations Commission said that if the City employees' union's allegations are true, the City of Mill Creek's actions may constitute an unfair labor practice and will be investigated further.

As previously reported by the Beacon, four staff were sent layoff notices in June, three of whom were represented by the WSCCCE/ AFSCME...