Beacon Publisher Paul Archipley and Mill Creek Editor are in different generations but both have a love of community journalism. 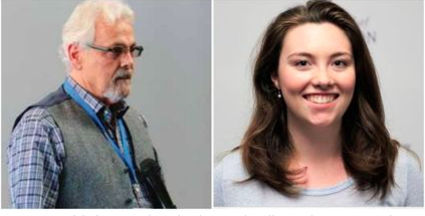 Publisher Paul Archipley and Mill Creek editor Emily Gilbert are at opposite ends of the generational gap. He is a Baby Boomer (an odd designation for a senior citizen); she is a member of Generation Z. But they have at least one thing in common: a love of community journalism.

With their perspectives separated by about 50 years, they thought it would be fun to share their views with each other and our Beacon readers. Subjects may range from current events to views of the past; whatever moves us. Obviously, reader responses are welcome.

Paul: So Emily, when I started my newspaper career, I was a student at Cal State Fullerton majoring in journalism in the late '60s and early '70s, and I landed a part-time job doing paste-up and layout for a group of weekly newspapers.

Emily: It almost sounds like an arts and crafts project (no offense).

Paul: You may not even know what I'm talking about, huh? In those days, reporters wrote on typewriters, and editors marked up their stories on paper, then typesetters would type the corrected copy for the back shop. That's where we waxed the back of the copy, cut it with X-acto knives, and laid out the stories and photos on flats during part of a long process that led to plates on the press.

Fast forward to 1992. When my wife and I started the Beacon, desktop computers were a new thing, and we were able to launch the newspaper out of a spare room in our home, writing, editing, and laying it out on a computer screen. What a difference a couple of decades make, huh?

Emily: Yeah, that sounds way different from what we do now, or at least, what I do at the Beacon. Debbie (the Beacon's designer) has told me about the process newspaper people used to go through with what sounds like an army of coworkers. It seems like a different industry.

It's hard to reconcile the old way of designing a newspaper with how we do it today (especially now that I'm working from home). I'm used to Google docs, emailed press releases, and finding stories on social media. Then I upload files in a shared internet folder or email Debbie the stories, and then wait for her to email the PDFs of the newspaper pages a few hours later. It takes only, like, two people to put a paper together. It's not exactly what most people picture, I would think, of newspaper work, and certainly not what I learned in school!

Paul: It never is. I actually designed my own "emphasis" under the university's Communications umbrella. "Foreign Correspondence."

I envisioned myself on Paris's left bank, filing stories for some major U.S. newspaper. Still waiting to find a use for all those French classes I took. But go on.

Emily: I started my journalism career when ... well, I guess I am at the start of my journalism "career." I did three internships in college (go Huskies) – some paid, but mostly not – but this is technically my first newspaper job.

My first internship was in a single newsroom of six people producing two twice-weekly papers, but the other two were in newsrooms with probably 100+ people. Now I do all of my work on my phone and a MacBook Air, and it's mostly a singular task.

It's nice to be so mobile, but sometimes I wonder if I missed the "golden years" of journalism. When do you think was the best time to be a journalist? Is there a best time? Do you think journalism is different now, because of the state of the industry than how it was when you started?

Paul: I feel fortunate that I started my career during an exciting time in history, but sad that change has been so slow. In the 1960s and 70s, we were idealistic and, unfortunately, naive about how we thought we were changing the world. The anti-war protests, the civil rights movement, the rise of women's rights – we thought we were making a huge impact on our world – for the better, of course.

Now, 50 years later, I see that, yes, some things have changed for the better, but we're not nearly as far along as we idealistic young people thought we would be. We were full of ourselves. Now, I think quality journalism is as important as ever. These could be golden years, too. But the business model no longer works, and the challenges – social media, in particular – are huge. Too many people are getting their news through social media – Facebook, Twitter, etc. – and while they can find quality work leeched from reputable sources (i.e.; newspapers), they also see, well, crap.

It doesn't help that the leader of our country demeans the hard work of good people who, by and large, are doing their part to make the world a better place.

Emily: Wow. To see what you were covering back then – anti-war protests, civil rights movement, the rise of women's rights – I'm just struck at how cyclical history is. And, how slow we are to change.

We're still writing about those issues. I'm reading this against the backdrop of the news coverage of the weekend's protests about police brutality and George Floyd's death on my mind. I am amazed. I kept thinking our careers in journalism were so different (you just emailed me that you began your career with a typewriter, and I'm not sure my family even owns one now), but it seems like the issues we wrote/write about are very similar.

I wish our country had made much more progress in the last 50 years, but it is interesting to note that our work isn't so different. Except for the technology bit.

Paul: Well, it was an electric typewriter. I'm not a dinosaur.

Emily: I personally think that now is the time for local news to shine (obviously I'm biased). When I say local, I mean hyperlocal. As in, local newspapers that will write a full-length story on the local high school basketball game, or about construction in a small city park, or quirky little things in town – not reprint stories from wire services (although I do like the Associated Press a lot).

Unfortunately, I think some people have lost trust in many big media companies – with a great history of quality coverage – due in part to the rise of social media. That's where I think hyperlocal news can come in and fill some gaps since it's a lot easier to get the full story when you're literally closer to it because you live there. Maybe I'm being idealistic, but I think it's true.

Paul: I applaud your idealism. Even though I'm at the tail-end of my career, I share it. To be continued.