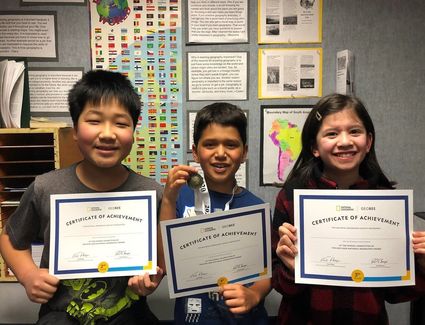 Andy (Ji-Hoon) Park, Sorin Bulgannawar and Maddy Swanson beaming with joy with their certificates of achievement.

Mill Creek Elementary was one of the nearly 10,000 schools across the nation that competed in the National Geographic Society’s GeoBee. The rigorous competition tests students' knowledge of both the United States as well as the world.

Students compete in seven rounds of questions before moving to the semifinals.

Placing first at the classroom level and first in the regional competition, Sorin Bulgannawar stated, "I felt so happy, I could cry, and I did!" Student, Sherry Zhu, commented that they were tears of joy. He qualified for the state competition.

The competition takes months of p...