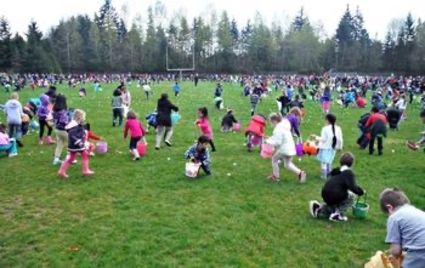 The City of Mill Creek has canceled Eggstravaganza, the City-sponsored egg hunt event in April, in response to the COVID-19 outbreak. See their press release below:

"In accordance with Washington Gov. Jay Inslee's emergency ban, all social gatherings of 250 people or less through the end of March, the City of Mill Creek has canceled its annual Eggstravaganza event on April 11.

"The governor's ban applies to all social, recreational, spiritual, and other community gatherings and includes parades, concerts, festivals and fundraisers in Snohomish, King and Pierce counties through March 31. The ban can be lifted or extended depending upon the overall health of the community and the spread of the disease. Gatherings of less than 250 people are allowed at this time but officials recommend that social distancing measures and sanitizing measures be put into place. Adequate social distancing and sanitation requirements are not possible at large events like the Eggstravaganza.

"The Eggstravaganza attracts between 4,000 and 5,000 attendees each year to Heatherwood Middle School for egg hunts and other activities. The event requires months of planning by city employees and many hours of hands-on work by dozens of volunteers before and during the event. Some volunteers already have decided not to participate because of the viral outbreak.

"Even if the governor cancels the emergency ban at the end of March, there would not be enough time for the city and volunteers to prepare to put on an event in April that would meet the city's and community's expectations," said Mill Creek City Manager Michael Ciaravino. "Because of the unprecedented challenges put upon us by the coronavirus, we will, unfortunately, have to cancel this year's event."

"The City of Mill Creek is working with county and state officials as these measures and other measures are being put in place to slow the progress of COVID-19 in our community.

"Questions and concerns can be directed to the city by calling (425) 745-1891. More information about the governor's proclamation can be found at https://www.governor.wa.gov/."