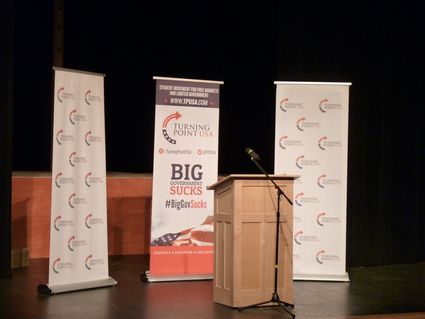 The stage was set for Kyle Kashuv, a survivor of the massacre at Stoneman Douglas High School on Valentines Day 2018. Banners with the words Government Sucks were behind the teen when he spoke to a diverse audience at Jackson High School on Tuesday, Feb. 19.

Mill Creek resident Marisa Moreno is a concerned mother of a student at Jackson High School. She was insulted by the misleading materials distributed to promote a presentation by the survivor of the 2018 massacre at Stoneman Douglas High School.

Moreno and a group of women from Moms Demand Action sat in the auditorium at Jackson High on Tuesday, Feb. 19, saying she was stunned by what she described as one-sided views fostered by a speaker brought to Mill Creek by the newest club on the high school campus, Turning Point USA (TPUSA).

“We were shocked,” Moreno told The Beacon. “What are you supposed to think when you are invited to hear from a young man who survived the most horrendous school shooting in recent memory?”

The Mill Creek chapter of Moms Demand Action was established by Moreno a year ago after the bloodshed in Florida that claimed 17 lives.

The focus of TPUSA, according to an email sent to teachers and staff by Jackson principal Dave Peters, is the importance of “individual rights, limited government, fiscal responsibility, free markets and capitalism.” Peters said the student group is the newest club at the Mill Creek high school.

In a memo sent out before the presentation, Peters assured staff at the high school that the program fit within district guidelines that prohibit activities that promote or oppose any political candidate or ballot measure. The presentation was promoted as the survivor’s perspective on gun rights, school safety and the importance of the Second Amendment.

“As individuals and as ASB groups,” Peters wrote, “we have a constitutional right within specified parameters  to hold fruitful and civil discourse on social topics.”

Tables in the lobby leading to the auditorium were staffed by young men, many of whom wore baseball hats with “TRUMP” or “Make America Great Again” slogans above the bill. Members of the Republican Club from the University of Washington distributed flyers that presented their own views on a variety of social issues.

The featured speaker at Jackson was Kyle Kashuv, a gun rights activist, who was a 16-year-old junior at Marjory Stoneman Douglas High School during the Valentine’s Day shooting. The self-proclaimed conservative claims to have “an impressive following of 54,700 followers on social media.”

Kashuv told the estimated crowd of 400 at Jackson that he blames the administration at his high school and “the cowards” from Broward County for allowing the shooter to roam freely through the hallways of the open high school campus.

His contention is that all schools should have a single point of entrance and have individuals familiar with the use of firearms on campus ready to use their weapons to deter events like what happened at his school from ever happening again.

“I knew this would happen,” Kashuv told the audience. He blamed the media for turning the tragedy into a narrative to promote gun control.

Kashuv said the school resource officer at his high school failed to take action to save the lives of teachers and students.

“Stoneman Douglas is proof that a single school resource officer is not enough to deter a person armed with a gun determined to kill people.”

Dressed in a suit and tie in front of a banner that read “Big Government Sucks,” the teenager explained how he has was harassed and beaten by classmates for his defense of the right to own guns in the days after the massacre.

Kashuv claimed that reporters from television stations and newspapers ignored him after the shooting in hopes of obtaining quotes from the Stoneman Douglas students who have become national heroes for their “very public” campaign against the right to own guns.

His comment that laws that limit the ownership of handguns and rifles have been “inspired by whispers” drew a round applause from the pro-gun portion of the audience. He attempted to appeal to the women in the audience, proclaiming ”a weapon is the most feminist thing possible when it comes to a single mom protecting her family.”

Kashuv repeated his desire to keep the debate over gun control “respectful,” but freely interchanged the words “Democrats” and “liberals” as opponents to his Republican conservative agenda.

“We all agree that we want school safety,” he said with an extra emphasis. “We need to hold school and government officials accountable for their actions to ensure they will follow through with the rhetoric they pledged in the wake of another school shooting.”