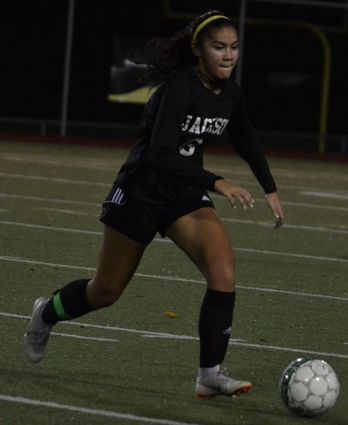 Jackson's Kathryn Cheng runs after the ball during a Wes-King 4A District tournament game Thursday, Nov. 1, at Everett Memorial Stadium.

The third time was definitely not the charm for Jackson.

The Timberwolves had successfully defended against two previous corner kicks by Camas.

But on the third attempt, Maddie Kemp found the ball and booted what turned out to be the only goal of the game in the 30th minute to give the Papermakers a 1-0 victory over the Wolfpack in a first-round 4A state girls soccer tournament game Wednesday, Nov. 7, at Camas High School.

“The placement was really good,” Jackson coach Sarah Smart said. “They put it right on the six. All kinds of players were crashing for the same ball. We just wer...