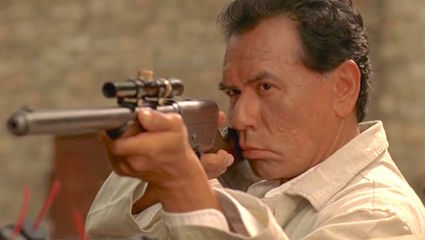 Wes Studi stars in "The Only Good Indian," screening free Saturday, Nov. 17, at the Edmonds Theater. It's presented by the Edmonds Diversity Commission.

Coinciding with Native-American heritage month, and the first time in history that Native-American women were elected to Congress, the Edmonds Diversity Film Series offers a free screening of the film “The Only Good Indian,” starrng Wes Studi, Saturday, Nov. 17 at the Edmonds Theater in downtown Edmonds.

Set in the early 1900s, the film tells the story of a young Native-American boy who is sent to a “training school,” a fate suffered by many Native-Americans for decades.

He escapes and is pursued by a Native-American bounty hunter, portrayed by Wes Studi, who has renounced his Native heritage and adopted the White man’s ways.

“While the story harkens back to darker days in our country’s history, its core message of oppression and assimilation is still relevant,” said Diversity Commission Chair Diana White, herself of Native-American ancestry.

“It’s particularly fitting for us to screen this film in November to coincide with Native-American heritage month, as well as the current work by the Edmonds School District to engage students on topics of diversity and inclusion.”

The series will skip December, returning January through April with a compelling line-up of films on third Saturdays. All film screenings are free. More information is available about the upcoming films, including synopses and trailers, at www.diversity.edmondswa.gov.