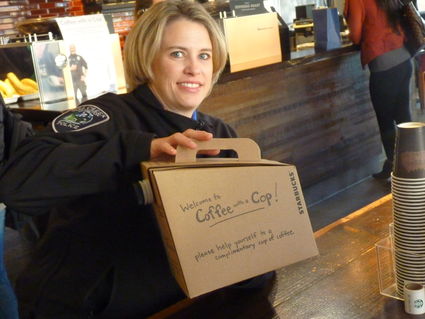 Detective Tara Hoflack pulled premium duty when she was assigned to serve drip coffee to patrons at the Starbucks in Town Center. The 18-year veteran of the Mill Creek force said Coffee with a Cop allowed her the unique opportunity to meet with people who are not suspected of committing a crime.

It’s not unusual to see a police car at a coffee stand. What was unusual was the reaction of customers at Buffalo Espresso’s drive-thru window who were served steaming cups of their favorite morning brew by uniformed Mill Creek police officers.

Many of the patrons were speechless when they pulled up to the window to be served by an officer armed with a huge smile.

“Many of the customersespecially the regularsdid not know what to say when they were greeted by a uniformed officer with a sidearm in full view of the drivers,” laughed Detective Sgt. Stan White, who organized the event at three locations on the morning of Wednesday, Oct. 3. Coffee with a Cop is held once every year in communities across the country.

White said while many customers were speechless, others wanted to know more about the delays to the construction project on 35th Avenue SE.

“The conversations were more neighbor-to-neighbor than citizen with cop,” White told The Beacon. “One of the regulars who stopped in for his coffee has a son on the same team as my son. Our conversation quickly shifted from the status of our roadways to the upcoming season for our boys.”

Officer Brett Thompson got into a conversation with a man who was wearing a fishing hat similar to one he has at home.

“After we laughed about the hat, our conversation turned into a comparison of fish tales,” Thompson said. “That was awesome.”

Detective Tara Hoflack and Officer Chris White staked out the Starbucks in Town Center, where they poured drip coffee for any resident who joined them at the long table near the rear of the room.

White said her conversations with Starbucks patrons were more personal than professional. She was especially taken with one woman who had provided foster care for 53 children.

“People are amazing,” said White, who has been a law enforcement officer for 18 years. “This is the best duty, because it gives me a chance to talk to people who are not suspected of having committed a crime.

“There are some really good people who live and work in Mill Creek. This event gave me a chance to sit down with some of them and have some real conversations.”