Retirement was far too short for city’s first K9 officer 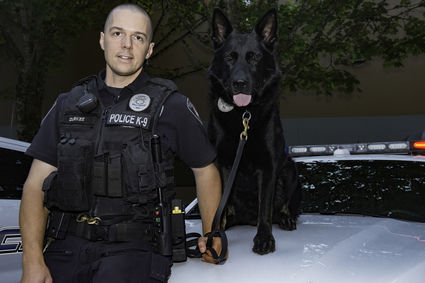 Mill Creek Officer Ian Durkee and his partner Rasko were inseparable. The highly-trained black German Shepard was euthanized earlier this month shortly after doctors discovered what they thought was cancer during a procedure to drain fluid from around the dogs heart. Rasko had been with the department since 2013 and was credited with 32 arrests from 130 deployments during his abbreviated career. Durkee was not available to comment on the emotional loss of his partner.

The first four-legged member of the Mill Creek police department was removed from active service in March, a full year ahead of schedule after his partner/handler Officer Ian Durkee noticed the black German Shepard having trouble breathing and an distended abdomen.

When his veterinarian detected an elevated heart rate, the dog was scheduled for surgery at the Washington State University Veterinary Teaching Hospital in Pullman.

Police Chief Greg Elwin said he fully expected the canine to have several months of “the good life” lounging on the grass...