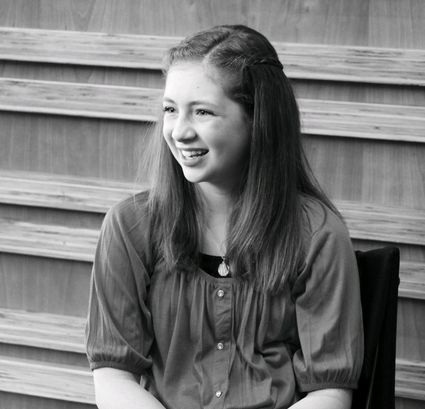 Eighth grader Faith Murray was a competitive swimmer, played the saxophone and the flute until April when the latest wave of pain caused by the rare disease known as Chronic Recurrent Multifocal Osteomyelitis (CRMO) shut down her busy life. Faith suffered two collapsed vertebrae at the age of 4, but her condition was not diagnosed for almost three years. Only one out of a million girls in the world have the ailment, which explains why investment into research into treatment and a cure have left CRMO to be classified as an orphan disease.

Six months ago, Alderwood Middle School student Faith Murray was a competitive swimmer. Today, she needs help to get to her classroom on the rare days she is actually able to go to school.

Faith’s heartwarming smile and her innocent eyes conceal an old soul who has endured more than her share of agony during her short span of years. She maintains an upbeat spirit and spends her time doing all she can to improve the lives of the people around her.

The 13-year-old has suffered from the crippling pain of Chronic Recurrent Multifocal Osteomyelitis (CRMO) for almost a decade. Her ailment went undiagnosed for more than three years as doctors tried to determine the cause of her agony.

“There is no organization like the American Cancer Society or the Muscular Dystrophy Association,” her mother, Libby Murray told The Beacon. “This is what’s known as an Orphan Disease. The closest thing we have to a support system is a Facebook group we started out of desperation.”

CRMO is an extremely rare auto inflammatory disease that affects the skeletal system by causing painful lesions that destroy bone. Researchers have documented only 400 cases around the world. Libby said the fact that the condition is only diagnosed in one girl in a million girls means drug companies have very little incentive to invest in research for a cure or treatment for the symptoms. CRMO has been identified in boys at a rate of one-in-six million.

Libby describes her daughter as “one-in-a-million ..in more than just her diagnosis.”

CRMO does not just affect young people, said Faith. She knows of babies who have been diagnosed at as young as five months old. The unexplained crippling disease has ben discovered for the first time in men as old as 50.

“Faith was only four when she woke up with two fully collapsed vertebra. Since then we have found more lesions than we can count and pain is a constant companion,” Libby explained. “Now, at 13 years old, CRMO has taken away much of her mobility and independence and doctors have run out of ideas on how to help her. ?She continues to push forward with hope that answers and help will come...but that can only happen if we search for better answers, educate our community about this disease and support research.”

The lack of exploration into the cause and treatment of CRMO has left doctors with limited options in efforts to treat the pain and deterioration of Faith’s bones. Her have doctors tried radiation and surgery to relieve her symptom without success. At one point her doctors tried intervenes therapy with Remicade, an expensive drug that only gave her pustalar psoiasis.

The disabling pain, according to Faith, comes in waves. The current wave began in April. There are times when she is well enough to attend class at the middle school for an hour once a week. While at other times she is dependent on tutors and work sent home by her teachers. Her mother said she has not been able to play the saxophone or the flute since June.

Despite the obstacles, Faith remains optimistic. She earns straight As in her schoolwork and does her best to maintain her friendships at school. With a smile, Faith admits that on the rare days she makes it Alderwood Middle School, she reserves her energy so that she can attend her favorite class, history.

Using the model of fundraisers staged by larger organizations to collect money for research into chronic diseases, the mother and daughter tandem staged a localized version of a 5K walk/run/wheelchair glide fundraiser in November to benefit the Seattle Childrens Hospital CRMO Fund and Kailas Komforts, which supports CRMO families.

Participants were encouraged to “Walk Wherever They Were.” Faith and her mother distributed bracelets for the event and t-shirts with a comical skeleton printed on the front to help raise awareness of CRMO.

In addition to fundraising, Faith has become an ambassador for the for the Melodic Caring Project, a group of singers and musicians that perform songs that reflect the personal challenge of dealing with chronic ailments at public events in the community. The outgoing teenager has appeared with members of the Caring Project on New Day Northwest on KING5, been interviewed on KEXP and assisted with live streams of performances during Bumbershoot at the Seattle Center.

“There is really very little we can do but deal with the symptoms until the pharmaceutical companies decide to invest in money into CRMO research,” Faith said. “Until then, all we can really do is try to raise awareness of the condition. CRMO affects more than just the people who have been diagnosed. It impacts the family members and the people around them too. And so many more out there who may not know what is causing their pain.”

*Information about CRMO can be found at http://crmoawareness.org.

*Donations to the CRMO research program at Seattle Childrens Hospital can be made at https://giveto.seattlechildrens.org/CRMOfund.

*Support for families can be found at http://www.kailaskomfort.org.

*Information about The Melodic Caring Project can be found at https://melodiccaring.org.