A Taste of Edmonds at 35 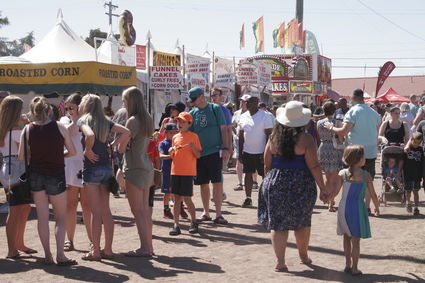 You can choose from among 35 food booths at A Taste of Edmonds, including four from Edmonds. The Taste is Friday through Sunday.

A Taste of Edmonds

Thousands of visitors will jam the city Friday through Sunday for the 35th annual A Taste of Edmonds. Parking will be tight, so consider Uber or the free shuttle from Edmonds-Woodway High.

Yes, there are always some who bemoan the festival’s bustle and noise, especially those who live near Civic Field. But the hard-working folks at the Edmonds Chamber of Commerce, who work year-round on this behemoth, want to remind Edmonds residents to think local.

Two weeks ago, chamber Membership Manager Jan Nicholas wrote a piece for the Beacon titled “Why isn’t Edmonds in A Taste of Edmonds?” She offered several reasons why there only are four local entries  Kafe Neo, Demetris Woodstone Taverna, Scott’s Bar & Grill and Moonshine BBQ  among the many food booths.

So at the same time that the majority of local eateries hesitate putting a booth at Civic Field, like never before the chamber is reaching out to residents to put more “Edmonds” into A Taste of Edmonds.

It begins Friday. Because the chamber understands the Taste impacts the community, President and CEO Greg Urban said the chamber will show its appreciation by offering all Edmonds residents free entry from 11 a.m. to noon during “Edmonds Hour.”

Your valid ID showing an Edmonds address means you can bypass the $5 admission fee (up from $4 last year) and spend as much time as you want at the Taste.

“This is the first time we have offered a free hour for Edmonds residents,” Urban said. “The Taste impacts our community, and we wanted to show our appreciation to everyone.

“If you haven't come to the Taste for awhile, this is a great opportunity to come back and check it out for free. The festival has changed and morphed over the years, so this will be a chance to give it a try again.”

The Edmonds-Woodway Jazz Band will perform on the Main Stage during Edmonds Hour.

In addition, for many years the chamber has provided two free tickets to the residents immediately surrounding the festival.

“I know that people living in the general area feel that they are also impacted, but we can't give passes to everyone,” Urban said. “This is a fundraising event to benefit the community and nonprofits. I hope everyone understands this and is willing to attend and help us reach our fundraising goal.”

During the Taste, a portion of Bell Street will be renamed “Edmonds Lane,” where the spotlight will shine on Edmonds businesses. This is a first at the festival.

“We are trying to highlight local shops,” Urban said. “We are also providing circular signs that say ‘Edmonds Business’ and ‘Local Business’ for vendors from the area to highlight them.”

Also new and local is the Edmonds All-Star Karaoke Contest 8:45 to 10 p.m. on the Main Stage. Urban said it’s a chance for all to see who is crowned Edmonds’ best vocalist.

In addition, local artists are invited to an open mic session 11 a.m. to 1 p.m. Sunday on the Main Stage. It’s for vocal and acoustic performances only.

“The Main Stage is a great venue to showcase local talent, so we eliminated the bands on Sunday morning and wanted to give aspiring performers a shot at fame,” Urban said.

New this year is the Beer Garden Cornhole Tournament, which will be an annual event.

You can’t beat the dictionary for the definiton of “cornhole”: “A game in which small bags filled with dried corn are tossed at a target consisting of an inclined wooden platform with a hole at one end.”

Registration is over, but you can certainly watch the fast-paced action. The tournament will take place the first two hours each day in the beer garden. Teams of two will square off in a best two out of three single elimination competition.

The top teams on Friday and Saturday will play on Sunday until winners are crowned. Up for grabs is $500 for first place, $250 for second and $100 for third.

All participants get a “May The Cornhole Be With You” T-shirt.

“We wanted to add an activity to the beer garden in the morning hours, as there is very little activity before 1 p.m.,” Urban said. “It didn't make sense to pay for singers to play on the stage without an audience.

"The cornhole tournament will provide some fun competition to start off the day and, if you are good enough, some prize money.”

Food booths: 35 food booths featuring a wide range of options, from barbecue to alligator on a stick, corn on the cob and ice cream. Best booth name: Mac & Cheese Whaaaaaat.

Beer Garden: Welcomed by KZOK radio, music will include popular bands the Beatniks, Spike and The Impalers, the Afrodisiacs and Pearl Jam tribute band Washed In Black. Note: $2 cover charge to beer garden after 4 p.m. on Friday and Saturday.

The Kid's Stage: Welcomed by KMPS Radio and Lynnwood Honda, and hosted by The Rowdy Referees. Appearing on the Kid’s Stage will be Reptile Isle, Kid’s Karaoke, and several local favorites.

Wine Garden: There will be a selection of Northwest wines and presentations by Edmonds native Jeff Boyer, Uncorked. Meet the Winemaker in the Wine Garden on Saturday. Meet Ron Bunnell from Bunnell Family Cellars from 3-5 p.m. and Sorin Dumitru from Bontzu Cellars from 5-7 p.m.

Free shuttle: A Taste of Edmonds will be making it easy to visit by dropping folks off at the festival entrance on Seventh Avenue North. Parking and shuttle are free. The buses will depart and return to Edmonds-Woodway High School every 15 minutes beginning 11 a.m. Friday, Saturday and Sunday. 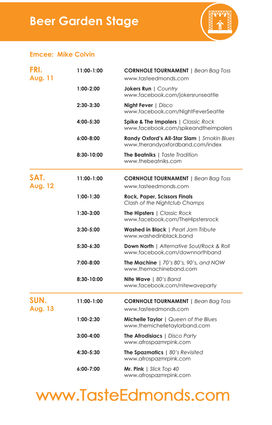 Safety: The Edmonds Chamber of Commerce hires both private security and police officers to make the event safe. “We take this very serious, and do all that we can to protect our city,” Urban said. “Did you know that the Edmonds Chamber pays for extra emphasis patrols in the evening? We are not required to do so, but pay for these patrols from 10 p.m. to 2 a.m., well after the Taste is over.”

Addendum: Sandy the Seagull has flown to bird heaven, no longer serving as the Taste’s theme. RIP.