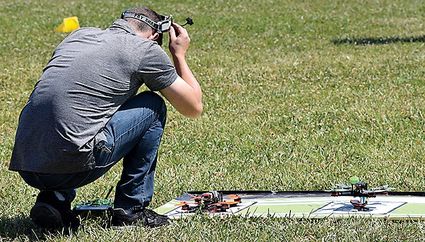 One of the drone racers places his drone before the race begins during tryouts on July 23 in Snohomish.

Drone racing is often viewed as an individual sport, but the upcoming event will feature six teams with six pilots each, who will be competing in individual, team and relay events. There will be a team score based on the racers’ performances throughout the day in the different events.

“You have one race where all six drones will be flying at the same time from one team, so they have to strategize to make sure when they’re taking off, they don’t crash each other’s,” said Scott Whiteker, the CEO of the Pro Aerial League. “So that for us, that’s kind of a fun thing to try. Try something new and you can really bring more people into the sport.”

All pilots at the competition will be flying the same kind of drone, made by Thrust, a partner of Pro Aerial League.

Tryouts for the competition were held on July 23 at DieHard Family RC Park in Snohomish. Pilots from around the area came to compete, working to earn one of the coveted 36 spots.

“It’s pilots from around the Northwest who are some of the best in the country,” Whiteker said.

While the majority of the pilots reside in Washington, there is a team consisting of Boise pilots and two competitors from Oregon.

Kody Knudtson is one of the pilots who attended tryouts and earned a spot. He became interested in drone racing as a result of his passions for model aviation and racing, and has been involved with the sport since April of 2016. Knudtson is looking forward to Pro Aerial League’s August event.

“It’s a good opportunity for a new league that’s different, it’s more team based than individual based and it’s in our hometown area, so I hope it becomes big and one of the bigger drone racing series that are out there,” he said.

The Everett-based league was started in April. The idea was formulated after GE2, a gaming event held at CenturyLink Field Event Center last December. Six thousand people showed up to the two-day event, which featured gaming, virtual reality and a variety of new technology.

“Besides virtual reality, which was emerging, the drones were so popular with a few thousand people watching the drone racing,” Whiteker said. “It was like, ‘Woah  people will watch this, people are interested in this. They want to learn more.’ So we formed the league after that.”

Pro Aerial League is unique for two major reasons: they want to draw large crowds and are passionate about the pilots behind the drones.

“A lot of people are looking at it and what we looked at was: it’s an individual sport, no fans are coming out, there’s not really a focus on fans,” Whiteker said. “And we’re like, ‘What if we made this an indoor, team-focused event?’”

Pro Aerial League thought the lack of fans was a major problem, and have focused their league on addressing the issue.

“We kind of wanted to take a spectator focus and be pilot focused,” Whiteker said. “We’ll treat them like rock stars, we’ll make sure they’re well-taken care of as they become ambassadors for the sport.”

“What we saw at GE2 was if we pair drones with other entertainment activities, it’s then more exciting to come to a drone event and watch,” said Brian Deller, a Mukilteo native who is one of the Pro Aerial League founders.

The spectator focus is one of the reasons the event on Aug. 19 will not only feature a drone racing competition, but there will also be dodgeball, laser tag and virtual reality. Deller said they want people to be able to “make a day of it.”

“It makes it more accessible for people who know nothing about drone racing,” Deller said.

Drone racing is a rapidly growing sport. Especially in the last couple years, chapters and leagues have been dramatically increasing their membership.

Whiteker is still learning to fly drones, and has only been involved with the sport since December.

Deller believes that the growth and emphasis on STEM education is schools will help drone racing.

“STEM education is really fueling what is going to cause drone racing to grow,” he said. “A big part of drone racing is building and fixing your drone.” 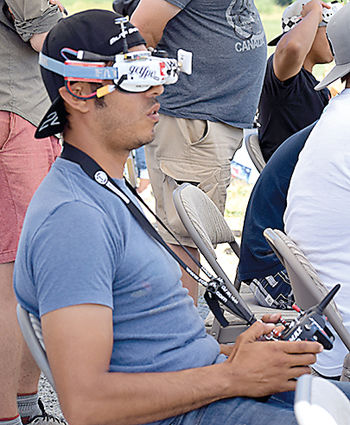 A drone racer holds the controller and wears a headset that allows him to see from a camera on his drone during tryouts.

Pro Aerial League is working on finalizing their regular season dates, which will run from November through February or early March. They will be participating in GE2 again this year, which is taking place in October, and are looking to grow into additional areas and conferences.

“We’re starting to have conversations and trying to find those areas that are interested in the sport and have a big enough number of pilots,” Whiteker said.

The league has already seen a lot of interest in their upcoming competition. They are excited to grow as a league, and see drone racing grow as a sport.

“We see that this sport is really endless,” Deller said.