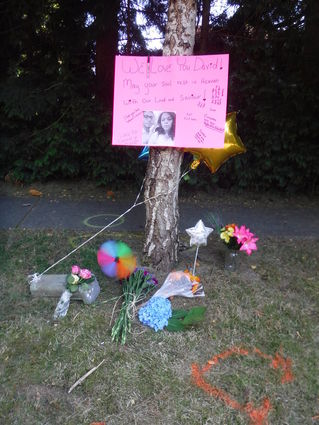 A hand-written sign and flowers around a tree mark the place where the car came to rest after running off the road during a high-speed chase on Village Green Drive last Saturday night. The driver of the car was reportedly trying to elude Mill Creek police when he was unexplainably ejected from the speeding vehicle, then run over by the police car in pursuit. The driver died at the scene. The police officer has been placed on administrative leave.

The routine stop of a speeding vehicle by Mill Creek police last Saturday night led to a fatality when the driver was ejected from his vehicle near the 1800 block Village Green Drive.

The officer believes that he may have struck the person lying in the roadway with his vehicle. The officer is in his 40’s and has been with the Mill Creek Police Department a little over a year and in law enforcement for over 10 years.

The suspect was declared dead at the scene.

There were no eyewitnesses to the collision. Identity of the driver is pending from the Snohomish County Medical Examiner, as well as cause and manner of death.

A Snohomish Multiagency Response Team (SMART) is now gathering additional information and will conduct an investigation due to the officer-related fatality. The name and cause of death of the suspect will be released by the medical examiner.

The crash on Saturday night was the second incident in a week involving a Mill Creek police vehicle. The previous incident began on Wednesday, July 12, in south Snohomish County when a deputy was injured and three patrol cars were damaged after deputies decided to use a controlled crash to stop the driver of a vehicle who refused to stop. The crash caused the fleeing vehicle to spin out and stall.