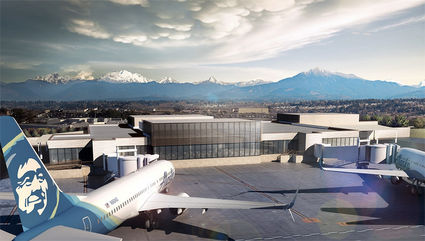 The city of Mukilteo’s legal fight over plans for commercial flights at Paine Field airport has reached the end of its road.

The state Supreme Court late last month declined to review the city’s appeal of Snohomish County’s March 2015 decision to execute an option-to-lease agreement with New York-based Propeller Airports before completing an environmental review of plans to construct a two-gate terminal.

That decision was based on the Federal Aviation Administration’s 2012 finding that the project would have no significant impact on noise, traffic or air pollution. In 2013, the city appealed that finding to the Ninth Circuit Court of Appeals, which threw the case out in 2016.

Similarly, courts have denied the city’s 2015 appeal of the option-to-lease agreement at every turn.

“I felt we had a good case,” Mayor Jennifer Gregerson said. “The county really didn’t have an option to back out of the agreement with Propeller. We feel they really should have done the environmental review before taking that step.”

Since 2008, the city has spent $624,215 challenging plans for commercial air service at Paine Field and conducting its own environmental review, with $309,398 of that being spent on legal appeals since 2013.

The county completed the state-required environmental review earlier this year. In May, the county signed a 30-year lease for the 11-acre site with Propeller, which broke ground there in June with its county-issued grading permit. Under the lease, Propeller is paying the county roughly $430,000 in yearly rent.

Though Propeller has yet to submit an application for a building permit, CEO Brad Smith said that’s coming soon.

“I know people are nervous,” he said. “But I think when people see what this is, they won’t be as upset as they thought they would be.”

Smith expects the terminal will be able to handle 16 flights serving about 1,000 passengers per day. In May, Alaska Airlines became the first carrier to sign on to the project, announcing plans for nine flights per day out of Paine Field beginning in fall 2018. Smith said there is “genuine interest” from another carrier, as well, but declined to specify which one.

“I don’t think people understand how important this is from an economic development standpoint,” Smith said.

Gregerson said she doesn’t buy into the hype about commercial flights boosting the region’s economy. 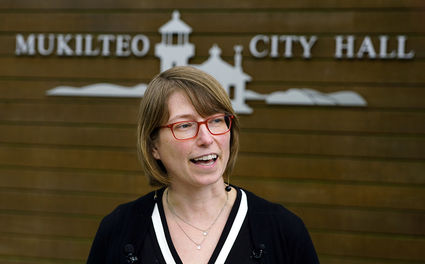 Mukilteo Mayor Jennifer Gregerson speaks to reporters outside City Hall on May 17 after Alaska Airlines announced plans to offer nine flights per day out of Paine Field beginning in fall 2018.

“I’m very skeptical that there will be an influx of economic development, as Everett has claimed,” she said. “It would be nice if those claims come true, but the impacts for me have always outweighed the potential positives.”

Gregerson said she now plans to develop a relationship with Alaska in hopes of further mitigating impacts on noise, traffic and air pollution.

“When you look at Alaska’s mission and company priorities and vision, they align with using sustainable equipment and having good relationships with surrounding communities,” she said. “But it’s possible that in the future Alaska won’t be the only airline operating out of that terminal, so we need to be ready to continue working with Propellor and the county.”

Gregerson said the city is also moving ahead with its $16-million Harbour Reach Corridor Project, which aims to reduce traffic congestion along the Mukilteo Speedway. She said Propeller is covering about $94,000 of that cost through traffic mitigation impact fees.