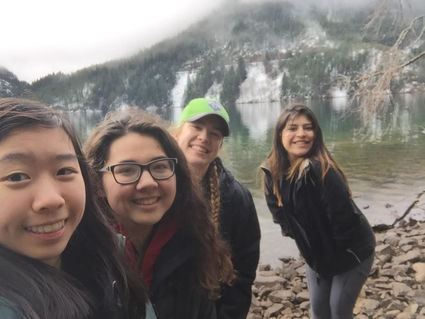 An overnight field trip into the mountains turned into a unique learning experience for 42 students from Jackson High School left stranded at the Environmental Learning Center when an avalanche cut off their only way out of the mountains.

The students were never in any danger during their stay at the center operated by the North Cascades Institute near the Diablo Dam east of Bellingham. Jackson High principal Dave Peters said the institute had just received a shipment of food in anticipation of another group arriving at the center.

“They had heat, plenty of foodand most importantly for the kids...they had Wi-Fi,” Peters told The Beacon. “I learned what is was to be a Millennial this weekend while I monitored emails and social media to make sure everybody was okay and that all the parents were informed.”

AP Environmental Science teacher Meghan Emery was one of five teachers who joined the students for the extended stay in the mountains. She said the staff at the institute presented a unique of learning opportunities for their guests. The impromptu lessons included information on local dams and the national park system.

“They opened up the Microscope Lab to give kids close-up views of some of the animals and plants in the area,” Emery said. “Coincidently, the resident expert on taxidermy was there to work in the lab. We had the chance to see animals cut open and hold some of the birds to understand how light they really are.”

Students had the chance to see pelts and animals stored in the specimen freezer, including a bird that died while eating a perch. The science teacher was excited that her class had the opportunity to witness the power of nature first-hand as well as the chance to see deer that live near the center.

“They know that we can manipulate environments to grow blueberries and other crops that do not thrive during the winter,” Emery said. “But being snowed in by an avalanche was a real-life illustration of the power of nature. This was a cool to be at the mercy of our climate, as long as we were not in any real danger.”

The long weekend was not entirely serious. Emery said some of the students were able to get outside on Sunday morning to build “unusual creatures” in the snow.

The science teacher explained that there were some trying moments over the weekend because the institute was 20 minutes outside of cell phone coverage.

“They took everything in stride and were troopers through the whole thing,” Emery said with a wide smile. “They viewed their extra time in the North Cascades as an additional opportunity to engage in our purpose for being there in the first place.”

The teacher and the principal agreed that the students would have liked to use the unexpected sleepover at the institute to do homework, but none of them brought laptops on the field trip.

“They definitely had their phones,” Peters said with a laugh. “But not their computers.”

Junior Jessica Ramos, 17, said her classmates were cautious when they went outside, knowing that it would be difficult to get any medical help if something really bad happened.

“We spent a lot of time watching movies and playing board games,” Ramos said. “It was a vacation with 42 of my classmates....and my teachers. Whoohoo.”

Ramos did say that her teachers used the opportunity to teach the class about the power of nature when the buses drove past the avalanche. The group learned they escaped another night on the mountain when another avalanche swept over the highway only hours after they had left the institute

“The impact that the avalanche made on the terrain was amazing, Ramos said.”

The students had been on the mountain for two nights when Peters received word of the road closure on Friday afternoon along with the news that crews would not attempt clear a path until Monday morning. He monitored the progress of road crews beginning at sunrise on Monday. One lane of the road was opened to allow the bus to pick up students just after noon.

News crews from local television stations and anxious parents greeted the students when they pulled into the school parking lot just after 7p.m. Emery said she was in contact with members of the Jackson faculty so they would understand that the students who had been snowed-in over the weekend would be given leniency on any assignments that may have been due early in the week.

“One of my students asked if the homework I had assigned would be due the morning after we got home,” Emery said. “To be honest, by the time we got back to the school on Monday, homework was probably the furthest thing from my mind”