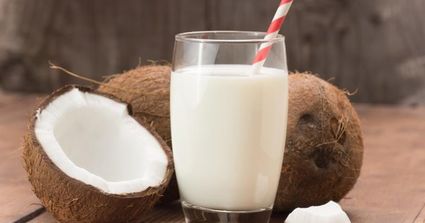 The next time youre at the store, pick up a fresh coconut. If youre not intimidated by the seemingly indestructible fruit, you can make your own shredded coconut and milk to bake and cook with.

What is hairy, unattractive and available in almost every grocery store's produce isle?

No, it's not an unshaven produce manager in need of a makeover. The answer is coconuts.

Yet most shoppers tend to buy coconut dried or canned instead of fresh. I don’t blame them.

Who wouldn't be somewhat intimidated by this seemingly indestructible fruit with an appearance that mimics a three-eyed monster’s disembodied head?

Even I must admit, more times than not, I was more interested in teasing my children with coconuts than I was in purchasing them.

Although cooking with whole coconuts requires some work, experimenting with this imported fruit can be very enjoyable and rewarding.

The following are a few tips to preparing the tropical fruit for cooking or baking.

Choose coconuts that seem heavy for their size, as this will be an indicator of a thicker flesh content on the inside and a higher water volume.

Select ones that seem to have the most liquid, by shaking them in your hand and listening for the sound of the “coconut water.”

It is important to note that coconut water is not the same product that is available in cans or listed as "coconut milk" as an ingredient in most recipes.

Coconut water is mildly sweet and naturally fat free. It tends to be more prevalent in recently harvested coconuts, as it absorbs into the inner flesh of the fruit as they mature.

The first  and easiest  thing to do when preparing a coconut is to drain the coconut water.

Each coconut has three “eyes.” One of them is always softer than the others. Take a metal skewer and find the softest one by piercing each of them.

Once you have determined which eye is softer, press the skewer through and rotate so as to grind through the remainder of the eye to achieve a bigger hole.

Shake this open eye over a glass or container until all the coconut water has been drained. The water should be kept refrigerated and consumed or frozen within a day.

If your coconut water tastes good, after you have drained the coconut, place it in the freezer for at least 12 hours. Once frozen, wrap the coconut in a towel and proceed to hit it with a hammer a few times until the outer shell has cracked.

Chunks of hard shell will break away from the flesh. The towel will help to contain the chunks of shell and flesh.

Pro tip: Prevent any possible damage to your kitchen counter by hammering the coconut on a very solid surface, like the floor of your garage.

After hammering the coconut, its flesh will now be separated from the hard shell. Any remaining pieces that are not separated can be carefully removed with a knife.

In addition, any thin brown skin left on the extracted white flesh can be removed with a potato peeler.

The task is a bit tedious, but very rewarding if you enjoy working with raw materials in the kitchen.

The meat can now be grated, frozen or cooked down to make the coconut milk called for in many recipes. The internet is a great resource for ways to cook and bake with the flesh.

To make your own fresh coconut milk, add one cup of boiling water to one cup grated fresh coconut. Pack the coconut into the measuring cup. Let it steep for about 30-45 minutes.

Squeeze this mixture in a clean kitchen cloth, or strain through a fine strainer, over a bowl to capture the milk.

Alternatively, the flesh can also be blended in a food processor and then squeezed to get even more milk from it. Keep the milk refrigerated. As it cools, a thick cream will rise to the surface.

Gordon Desormeaux aka Chef Dez is a food columnist, culinary travel host and cookbook author. Visit him at http://www.chefdez.com. Write to him at dez@chefdez.com or P.O. Box 2674, Abbotsford, BC V2T 6R4.