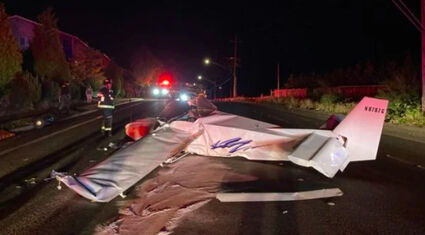 It was shortly before 10:20 p.m. that Snohomish Regional Fire & Rescue Battalion 71 was dispatched the crash in the 4300 block of 228th Street SE.

Crews tended to the two occupants in the plane, as well as a dog. Both occupants sustained minor injuries and were transported to a local hospital for

treatment. The dog went with them.

No one on the ground was hurt.

The FAA was contacted, and the scene was turned over to the Snohomish County Sheri...