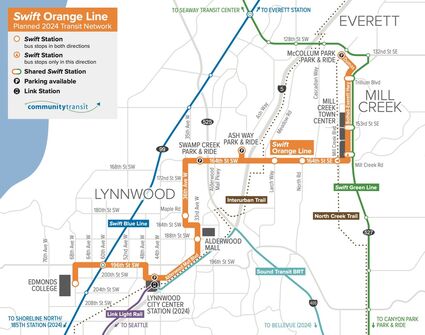 Community Transit has received a $37.1 million grant from the Federal Transit Administration (FTA) that clears the way for construction of the Swift Orange Line, which will connect Edmonds College in Lynnwood with Mill Creek via the Lynnwood light rail station.

Both new services begin operating in 2024.

The Swift Orange Line will be Snohomish County's third bus rapid transit line, and will run for 11.3 miles between McCollum Park Park & Ride in Everett and Edmonds College, traveling through Mill Creek and Lynnwood.

"The fast, frequent service Swift provides will be needed to help people in Snohomish County connect to and from the regional light rail system," said CEO Ric Ilgenfritz.

"We are grateful to the Biden administration and Transportation Secretary (Pete) Buttigieg for their investment in this project and our region, and to Sens. Maria Cantwell and Patty Murray and Reps. Rick Larsen, Suzan DelBene and Pramila Jayapal for their steadfast support of the continued expansion of the Swift network and a renewed emphasis on infrastructure investment."

As a part of the project, the transit facilities at McCollum Park and at Edmonds College will be renovated to better accommodate future services at each site.

Swift buses arrive every 10-12 minutes weekdays, and every 20 minutes nights and weekends.

The agency is building a network of Swift bus rapid transit lines and is redesigning its bus network to connect with regional light rail in 2024.