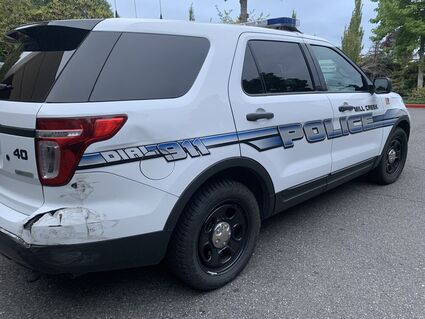 Damaged rear bumper of a parked Mill Creek Police SUV. No officers were injured in the incident

On Friday, Sept. 10 around 3:30 p.m., Mill Creek Police officers attempted to contact a person in the driver seat of a reported stolen vehicle parked in an apartment complex lot in 16100 block of Bothell Everett Highway. The driver used the vehicle to flee from police and hit a parked police car in the process. No police officers were injured.

The vehicle had been reported to police because it was driving erratically on Bothell Everett Highway near 164th St SE and was last seen pulling into the apartment complex parking lot. The license plate that was reported to police was BXW2133, which w...