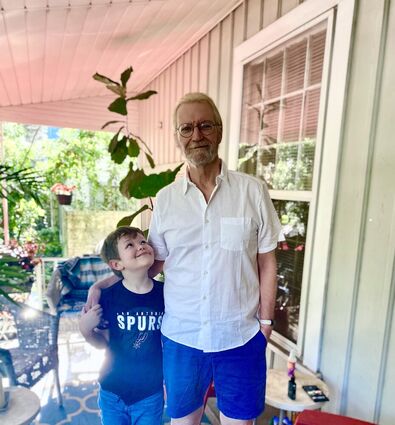 Chuck Sigars with his grandson.

Once every 17 years, much like the cicadas, my daughter takes a hard look at my hair and decides she can do better.

This is my theory, anyway. Even before I headed south to Texas last week, I made the mistake of joking about my pandemic appearance, warning her to not be shocked by how I look.

"You know I'm giving you a haircut," she replied, and the truth is, I did know that. I was unaware that there would be color involved, and negotiations are currently ongoing, but frankly anything would be an improvement.

Add to this an erratic sleep schedule during the past year, for no apparent reason, and let's just say you might want to keep your distance from an aesthetic standpoint alone.

A few weeks ago, I was up early for a Zoom call. It took two alarms and a lot of coffee to make me face the camera, and as I opened the initial Zoom window, before logging on, I checked my settings and noticed the box.

Maybe you've seen this box before; it was news to me. It was an empty box and next to it the words, "Touch up appearance." It was unchecked.

I exited out of settings and observed my face. It looked the same, which was tired, definitely not touched up as far as I could tell. I went back to settings just in case the box somehow didn't really get checked. It had been, and that's when I had not my first, but probably my most personal conversation with a piece of software.

"Are you telling me," I said in a whisper but definitely out loud, "that there's NOTHING YOU CAN DO?"

The meeting was fine, I took a nap afterward, and I'm now back on what feels like a normal sleep schedule. I've taken a hit this past year, though, no doubt about it, at least in terms of my appearance.

The lines are deeper, the hair is thinner, the beard whiter. As much as I've enjoyed seeing the faces of friends on Zoom, I can't help but notice my own.

There's a disconnect, then, and it's funny to me. I have an aging face, certainly appropriate for someone born in the 1950s, and the heart of a 7-year-old boy.

I mentioned last week that I began my personal process of re-entering the world by traveling to Arizona, to spend Mother's Day with my mom. It was awkward and odd, and eventually it was fine.

But this was always a two-pronged plan, and truly my only post-pandemic priority. I'm not eager to go inside a restaurant or a movie theater. I don't care much for going to the mall. I miss live music but I can still listen to music.

I needed to see my mother, though, and then it was all about a boy.

I've mentioned many times in this space the odd virtual relationship I've developed with my grandson. It began as a way to help out his harried parents during the pandemic, and then it developed into something deeper and more significant.

An hour a day, often more, seldom missed, a regular conversation that has grown into a connection neither of us completely understands but both fiercely protect. There's still an 1,800-mile gap, though, and as soon as that vaccination needle plunged I started looking at flights.

It's a strange thing, my yearlong virtual window into his world about to become very real, and I wondered how this physical reunion would go.

But this feels common, and coming soon to a lifestyle near you. There's been joking among my friends that these past couple of weeks I've been the guinea pig, the coal-mine canary, and all eyes are on my experience.

And I've been happy to share what I've found about rediscovering the rest of the world, the strangeness of more people, the uncomfortable sensations of not feeling safe when logic tells us the opposite. None of this was surprising, or hard to shake off.

But people aren't airports. We change and grow, learning new routines and shedding old habits. We age, we learn, we adjust.

They're going to be different, as we are. It would be unusual if we weren't, and from my recent experiences I'd suggest taking it slow, and give everyone some space to be awkward. We can relearn how to interact; understanding and kindness serve as social lubricants, always.

You'll surely discover that some things never change. And if you're lucky, the things that do will be worth the wait.

I knew from the beginning that I'd be a long-distant grandparent. I routinely visited him two, maybe three times a year from birth to just before he turned 6. They were fun because I felt as though each trip, I left breadcrumbs of grandpa love, hoping he'd hang onto a few for the next visit.

Then there was plague, and so on. Twenty months have gone by.

You know how kids get shy, even with relatives, especially after a long absence. Comfort has to be relearned; it doesn't take long, sometimes just a few minutes, but it's common and very recognizable.

I got into the backseat of the car at the airport, and there he was. He smiled widely, and then reached up and caressed my face. It was a bit like he was checking to be sure I was really there, but more like I'd only been gone for a few days, and he was just happy to see me.