Do you feel yourself languishing? | Darn Wright 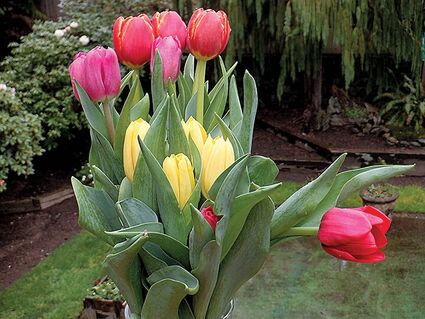 As you look around, do you feel you are the only languishing one in the bouquet? If so, then there is a yellow brick road towards mitigating your doldrums.

One of the ongoing debates within the social sciences and counseling fields has to do with the question of labeling or not labeling a person or a disorder. Overall the people I have seen in therapy sessions asked me what their diagnosis is, but to be honest some are motivated to ask because if they do not have the "right" diagnosis then their insurance company will not pay for their treatment.

There are the group of clients who immediately become more relaxed when I tell them they are dealing with a such and such psychological conflict. Their relief is attributed to being labeled so that a specific treatment plan can be developed with them. Plus it is extremely common for me to hear "You mean I'm not the only one who is dealing with this problem? I am not crazy after all!" Now acknowledging this I will bring to your attention a new "diagnosis," which might become part of our mental health profession's lexicon.

A cold case detective friend of mine sent me a recently published article that was written by an organizational psychologist, Adam Grant. "There's a Name for the Blah You're Feeling: It's Called Languishing" is a thought provoking exploration on what many of my patients and friends are going through.

Has anyone of your loved ones, friends, co-worker, or neighbors ever told you they were having trouble concentrating, or that they are just feeling sluggish? Then they go on to talk about not having their normal day after day motivation. This collective feeling of being somewhat joyless and aimless does have a name and it's called languishing.

Author Grant says, "Languishing is a sense of stagnation and emptiness. It feels as if you're muddling through your days, looking at your life through a foggy windshield. And it might be the dominant emotion of 2021." The psychologist went on to note "languishing is the ... void between depression and flourishing – the absence of well-being. You don't have symptoms of mental illness, but you're not the picture of mental health either. You're not functioning at full capacity. Languishing dulls your motivation, disrupts your ability to focus, and triples the odds that you'll cut back on work."

So you now have another response when someone asks you "How are you doing?" "Well, right now I am just languishing."

The antidote to languishing is not taking two aspirin and going to bed, which in this case is counterproductive, but rather begin to immerse yourself both physically and mentally into small and short-lived projects. Then, within Centers for Disease Control and Prevention guidelines, continue to nudge yourself to follow that yellow brick road towards having an anti-languishing life.

Throughout Dr. Grant's article he puts forth many short term goal suggestions. Some being while you're into those long slow nights ... "Netflix binge sometimes ... transports you into a story where you feel attached to the characters and concerned for their welfare..."

Many other practical suggestions consist of exploring new challenges or going back to those hobbies of long ago and you have often wondered why you put them away. "Give yourself some uninterrupted time ... That means we need to set boundaries. Getting more done wasn't just good for performance at work: We now know that the most important factor in daily joy and motivation is a sense of progress."

I will pass on the advice I was given by several different individuals who are winning their battle to break free from their state of decline. These men and women were emphatic that escaping from their halfhearted feelings about life came about "mostly because I chose to make smaller goals so I could get some instant gratification. Then reaching those short-term goals I received some instant gratification, which led me to get back my everyday normal mental and physical energy. Then of course along with that I began to like myself again."