Clearing out the COVID cobwebs on a sunny day | Chuck's World 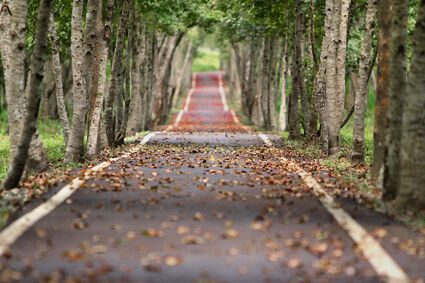 I went for a walk on Sunday afternoon, temperature in the low 60s with a slight breeze, a wildly unwelcome environment for SARS-CoV-2 transmission. A mask stayed in my pocket, mocking a man fully prepared for what, exactly? A coughing mugger leaping out of the bushes?

It's OK. It's all OK. It's spring and we're seeing sun again, a third of Washingtonians are fully vaccinated, and I understand baseball is being played. Even the news that we could slip back into Phase 2 restrictions doesn't, um, faze me.

I see signs of life, and it's welcome. Actually, I see signs of all sorts. I opened the refrigerator the other morning, mulling over breakfast, and decided to pass on a cold taco from the night before. This is not pandemic behavior.

Although I ate ice cream for dinner, so it's a work in progress. It was peach ice cream, too, so I'm counting it as fruit. Baby steps.

As I walked around the neighborhood, a longer route than I've taken in well over a year, I noticed new construction and other changes, reminding me that life has been continuing during our isolation interlude, and that I'm bound to be surprised as I start encroaching on the rest of the world.

I've heard some startling things about the light-rail progress, but the truth is I haven't been paying very much attention. I understand that we now believe in UFOs. There may be other things.

I noted a few younger couples out for a walk in the sun, some with babies. This is also a sign of life, although it's strange to think that when I first started walking these streets for exercise, these new parents had themselves yet to be born.

I remain, as in all things, an older model, still fairly functional but beginning to creak on the hills.

It was an excellent idea, I thought, to make an effort to exercise regularly during this pandemic. I really wish I'd followed through on it, though, instead of loafing throughout my 63rd year as if I had 63 more to fool around with. Creaking is not the only noise I make on hills these days.

I wonder what these new, shiny people think of this used car of a human being, scraggly hair bouncing off my shoulders, wearing a cap from Scotland and a sweatshirt marked by many, many salsa adventures this side of laundry day.

I don't have any illusions. I look like a guy who should be burying barrels of drug money in the desert. I smile and sometimes wave, but I have a good idea what they're thinking and I don't blame them.

It's not like I could even make conversation. What would I say? "Look, see that house there? It used to be a different color," and they'll smile nervously and life is really too short for this. I stay on my side of the street and try not to use slang I don't understand.

If I felt compelled to say anything to younger people, it would be to apologize for all of this. I had nothing to do with COVID-19 or anything else that I can think of, but it's worse for them and we all know it. People my age got permission to do what we secretly wanted to anyway, stay away from crowds and eat everything. "Carpe panis!" we shout from our windows (rough translation: "Seize the sandwich") and wave at the delivery drivers, happy with the freedom to waddle around the living room.

Young people have, on the other hand, endured the longest time-out in their short lives. I'm honestly surprised they all haven't packed up and moved to another planet.

But the day was too sunny, too full of movement and newness to be morose. I got a text message from an old friend, who mentioned that she'd been out and about, eating in lots of restaurants, and I almost replied, are you insane?

Eat in an enclosed space with strangers who talk loudly and chew with their mouths open?

It felt absurd to me, and absurd to be thinking it at the same time, and for some reason this cheered me up. My knee is going to jerk a million times over the next months and years, and I guess I'm just going to have to get out of the way.

I'll eat with strangers again, and rub elbows and wait in line. I'll talk to people without a piece of cloth over my mouth and nose, and maybe I'll go ahead and touch my face whenever I feel like it. It'll just take some time to get back to life, but life is what I'm interested in.

And a haircut, I suppose. That will probably get done this week, 18 months being long enough between snips, just so I don't frighten my mother, with whom I intend to spend Mother's Day like a regular person.

I'm going to go inside an airport and get on a plane, surrounded by strangers with unknown medical histories, packed and masked and probably not thinking twice about it.

Like my noisy knees, returning to something that looks vaguely familiar is going to go slowly and carefully, with plenty of creaking expected, but return we will, I promise.

It'll look a little different, but then it always does, and trust me, a sunny walk will do wonders. Just seize the sandwich and go.