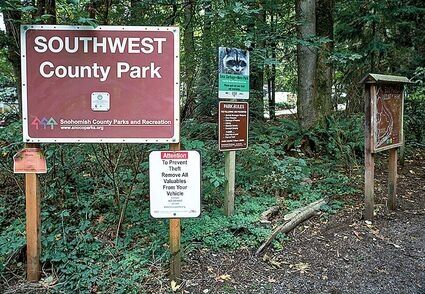 Trees in Southwest County Park in Edmonds were vandalized with hate symbols recently.

Edmonds Mayor Nelson on April 29 laid out a series of steps to tackle what he said are repeated "acts of hate" in the city.

The steps were prompted shortly after the City and Snohomish County officials were notified by an Edmonds resident of spray-painted swastikas on the trunks of several trees at Southwest County Park.

"Unfortunately, this is one of several similar incidents in Edmonds in the recent past," said Nelson in a news release.

The Edmonds Police Department took a police report, while the county Parks Department dispatched rangers to the areas where the incident happened.

After documenting the crime, rangers were able to successfully remove the symbols.

"The use of symbols like swastikas is an act of hate, meant to harass and induce fear in those who encounter them," said Nelson.

"Such continuing acts of hate, destruction of property, and intimidation to our residents will not be tolerated. We are taking action to ensure these acts don't take place in our parks and community in the future."

The Mayor is instituting the following measures:

The City is researching the placement of night vision "game cameras" on and in trails and parks in the City. The purpose of these cameras in public areas is to deter criminal behavior and to potentially aid in the apprehension of those committing crimes.

Signage would be posted at entrance and egress points notifying people using the parks that, due to factors of protection and safety, those entering may be subject to surveillance. The City will ask Snohomish County to place similar surveillance cameras at Southwest County Park.

With assistance from the City of Edmonds and various interested community groups, our community will be offered the chance for additional communication and education related to what defines malicious harassment (RCW 9A.36.080) and other hate-related crimes.

The City will work with invited and interested parties to develop a town hall meeting that will address these types of acts, interested partner responses, and what community members can do to help.

The Edmonds Police Department plans to reach out to the Edmonds School District to explore aiding or supporting additional Harassment, Intimidation and Bullying (HIB) and diversity and inclusion training and curricula within the school district.

Prevention and education are key to helping forestall the hurtful impacts of these types of behaviors, Nelson said.

Edmonds City Departments (including the Edmonds Police Department) will work with community groups, the Diversity Commission, the Youth Council, Snohomish County Parks, the Snohomish County Sheriff's Office, the Edmonds School District, and other interested public and private groups to "positively address the root causes of such hateful incidents and provide education related to diversity and inclusion," Nelson said.

"Once again, hate has struck our community. Once again, we must stand united against any people or groups that will use hate symbols, hate speech, or hate crimes to intimidate or harm members of our community.

"We know that neo-Nazis, white supremacists, and their accomplices continue to try and build more support across the Pacific Northwest and the country. We will continue to oppose them and their despicable acts.

"We also want to commend the community members who reported the incidents. These individuals recognized what they saw as tools of both anti-Semitism and hate, and a very real threat to people from historically marginalized communities.

Because of their willingness to speak up, these acts of hate could be confronted. We encourage anyone who witnesses or encounters acts of racism, bigotry, and hate to immediately report it to their local police department or an elected official.

"Snohomish County stands in solidarity with everyone who was harmed by these actions, and all similar actions, and we will continue to work to build a community that is welcoming, inclusive, and safe for all who live, work, and play in Snohomish County."