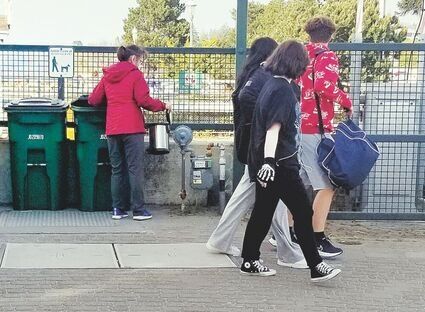 A woman offering free COVID tests by the Edmonds ferry discards her waste in a public garbage can.

The message is clear: Don't get a COVID test from anyone offering them on the streets of Edmonds. Better yet, just get a COVID vaccine shot in your arm, which is as easy as making a phone call (425-339-5278) and setting up an appointment.

On April 23, a reader alerted The Beacon and the Snohomish Health District that a woman had set up a table by the ferry and was offering self-administered nasal swab COVID tests.

"This was the same company reported in the news on KIRO and KING 5 that the Washington Department of Health and attorney general have issued public warnings about," said Charlette LeFevre, who lives in Edmonds.

The tests were free, but the tester was asking for birth dates, insurance information, and email addresses. In addition, information at the site said there could later be a fee.

According to information the woman provided at the table, her name was Katherine M. Nelson from Yuba City, California.

Also, according to a flyer at the table, the woman was working with Community Wellness America, a San Diego-based business that says "our team of doctors, nurses, lab physicians, and volunteer testers have committed to being present in your community to take on stopping the spread of COVID-19."

Steve Sterling, Community Wellness CEO, says it works with California-based Crestview Laboratory, which would provide results within 24 to 48 hours.

The Beacon attempted to contact Sterling with repeated phone calls, which weren't returned.

However, Q13 News reported that Sterling told them Community Wellness is a nonprofit operating with licenses in several different states across the country doing COVID testing. Sterling told the station it contracts with a third-party company that does the testing.

After taking photos and a video, LeFevre said she called the Edmonds Police Department shortly before 5 p.m.

Five days later, on April 28, after citizens complained about more free COVID testing in the heart of town at Fifth Avenue and Main Street on April 27 – in front of Starbucks and Treasures and Teas – the police released a short statement on Facebook:

"We have worked with the WA Department of Health to determine that the two curbside COVID test sites that appeared in downtown Edmonds yesterday have been identified as scams. We encourage all community members to only provide personal and insurance information to your trusted health-care provider. EPD will continue assisting with the ongoing investigation."

LeFevre said she noted that the woman by the ferry was not a medical professional and, according to her certificate – which The Beacon verified – had one hour of HIPAA training, which she completed April 20 by paying $15 to take an online course from Course for HIPAA, which is part of the online training company North American Learning Institute. (Those who fail the test can keep paying the $15 fee until they pass.)

The Health Insurance Portability and Accountability Act is a federal statute created 25 years ago to, among other things, protect patient confidentiality.

LeFevre said the woman left after a TV news station arrived. "She packed up and left her biohazard trash bin behind," she said, "and later dumped the trash in the public receptacle without gloves.

"Obviously, an uncovered table on a crowded public sidewalk is not a location to take a COVID swab test by a non-medical person. As a person who has worked in a biomedical research lab and is also HIPAA trained, this setup is wrong on many levels and puts the public in danger."

"Yesterday, a curbside COVID testing operation appeared in downtown Edmonds. We dispatched an Edmonds police officer who spoke with the gentleman offering the tests, who soon thereafter packed up and left the site. We have since learned that this operation appears to be a scam, with follow-up contact to persons initially tested that requests more personal information.

Nelson said Edmonds police the situation and shut down any continued attempts to set up unauthorized informal COVID testing sites.

Recently, he continued, the Snohomish Health Department issued a warning advising all people to "beware of unusual or concerning testing operations" like what was seen in Edmonds. 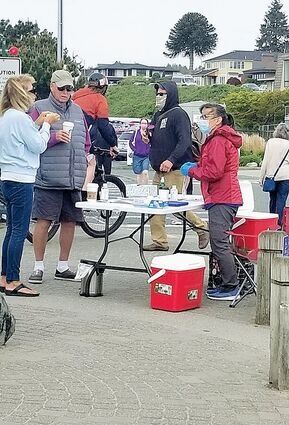 The COVID "tester" talks to people about getting a free nasal swabs. She also asked for personal information.

The Health District cautioned people from engaging with anyone offering testing who is not affiliated with a legitimate healthcare organization and who does not show proper identification.

In addition, the district said you should be skeptical about solicitations for free testing in public, at someone's doorstep, by telephone or email. Unfortunately, risk of substandard practices, inaccurate results, or identity theft do exist. People should err on the side of not engaging if approached.

Those with concerns about the legitimacy of a testing operation can contact the Health District by email at [email protected] or share details through the call center at 425-339-5278.

There is also a portal for filing a complaint with the Washington State Department of Health at http://www.bit.ly/3edAKDC.