Remote experience had its longings and perks 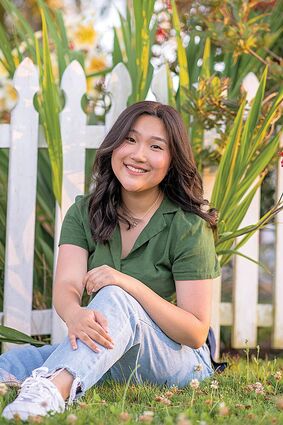 The perk to the pandemic was time.

Graduating Jackson High School senior and Youth Advisory Officer Esther Park had more time for new activities, and gained an appreciation for downtime. She was able to walk, bake, crochet, and connect with the people close to her.

She said her dad, Min Kwan Park, usually had a long commute for work as a computer engineer, but the pandemic led to remote work for him.

"I actually get to reconnect with my family more, my friends more – just because we had to really put in an effort to stay connected, and I feel like in its own way, it made us closer," Park said.

"That was kind of like one of the only things that you could do," she said.

Park has lived in the Mill Creek area for most of her 18 years, with her dad, as well as mom Yoon Kyong Choi and her younger brother Henry Park, 15.

She attended school at Penny Creek Elementary and Gateway Middle, and will graduate from Jackson High School this spring.

Her senior year was mostly remote, which had its benefits and its downsides.

She said she missed the small things that "you don't really appreciate when you're in school."

She missed walking in the hallway, saying hi to friends.

"Just talking to them in person, about school homework, even eating lunch in the cafeteria."

One tradition that seniors missed is a "senior pride" moment at assemblies, she said, where seniors run in and everyone knows, you're a senior.

"(Seniors) are the top dog of the school," she said, noting it would have been nice to be part of that tradition.

Even with what was missed, Park said she felt fortunate that her circle stayed pretty healthy. And the transition to senior year, though quarantined, had time as its benefit.

Her junior year was her most difficult year of high school, and "I've really needed some – like a break. And I feel like I really learned more about how to take care of myself, because I actually had the time to," Park said.

Her Youth Advisory work started about three years ago and during the pandemic, she was an officer, working as the Volunteer Events Coordinator. In this era, part of the skill is finding events.

"My job has now been mainly facilitating meetings," she said.

She said the 3-on-3 basketball, Trunk or Treat, and other City-sponsored soiree are not what they used to be, but some events carried on in a limited fashion. This year's Trunk or Treat was a drive-through event that gave Youth Advisory the chance to prepare candy bags for kids.

She said she remembers attending events as a kid, and just saw them as fun. Once older, she realized those events took a lot of work, and she signed on to help out.

The community involvement was heartening during the pandemic.

It gave her a chance to "leave the house with a purpose."

She and other Youth Board members helped with the City's Easter egg event, park clean-ups and other volunteer options.

The acts of service felt powerful. Knowing of financial instability others were facing felt hopeless, and taking action to ease that struggle was a lift.

"Giving back, during times like that, is especially meaningful," Park said. "I have limits in my power as an 18-year-old in high school, but at least I'm going to the food bank and helping them get food to those who don't have it."

Walking was another fix to the forces that provoke the heavier days. As she traversed the Mill Creek area, it was a time to look around and bond with her hometown, on foot.

"(The) Mill Creek area is just so pretty. We have the nicest trees and the cute parks," she said. As she was walking, she asked herself why she did not do that more often, and the answer was time. "I know a lot of people, who would testify, saying that their mental health got worse with a pandemic and quarantine, which makes a lot of sense, but, at least for me, I started very low, and I – through the time that was offered through quarantine – I learned more about myself and also just how to balance my life a little more. So that was really nice."

Park was an attendee at the recent Mill Creek Town Hall meeting on Zoom. She asked councilmembers the best way for youth to become informed about what their community was doing. More than one said to attend meetings, and pay attention to big projects such as the 19-acre property near Mill Creek Sports Park, called the DRCC site, or the Dobson, Remillard, Church and Cook property.

In that Town Hall meeting, council member, Benjamin Briles said, the future of Mill Creek is something youth may want to be part of, particularly if they intend to live in the City later on.

"Nobody cares about your future as much as you do," Briles said.

For Park, that future looks bright.

Now that the end of the year is close, she is looking forward to educational plans. She was accepted by five colleges, including University of Southern California, Bryn Mawr, Wellesley and University of Washington. She landed on Barnard College in New York and intends to major in political science.

If Barnard's plans to get students onsite this fall occur, she will be in New York.

"I liked that Barnard is a small liberal arts college so deeply connected to a renowned research institution such as Columbia University and the city of New York," Park said. "It has all the resources I need to enter the field of political science, such as various internships and strong alumni connections."