Snohomish County is still in Phase 3 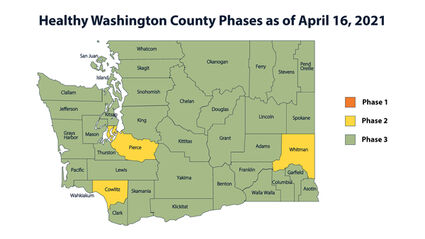 Three counties are rolling back to Phase 2, but so far Snohomish County remains in Phase 3 with the bulk of Washington state.

Snohomish County officials warned in the past Joint Information Commission meeting that if infection-rates spike, Phase 2 is possible here. Phase 3 allows dining establishments to move to a 50% capacity, opening opportunity for restaurants, gyms and other businesses to get on-track.

Losing ground are Cowlitz, Pierce and Whitman counties, as announced April 12 by Gov. Jay Inslee's office. The direction of metrics was a discussion for the JIC, with Executive Dave Somers saying in the April 6 briefing that Snohomish County is "moving in the wrong direction."

Gatherings are a top spreader, with the health district's contact-tracing showing origin of spread at baby showers, camping trips, high school sports, get togethers for church and in peoples' homes, and interaction at restaurants and bars.

On April 9, case rates were climbing for the third week in a row in Snohomish County. At the time, the rolling two-week case rate now sits at 121 per 100,000 for the period ending April 6. The count April 12 was 145 per 100,000. In that number, 32 people were hospitalized and four on ventilators. Once on a ventilator, about a third to half survive, said Dr. Chris Spitters, Health Officer for the Snohomish Health District.

Mill Creek is up to 612 sickened, as of March 12 data. That is a cumulative count maintained since January 2020, but the number is up from 539 last week. Mill Creek has residents 539 residents who recovered from COVID-19, meaning they and are not in isolation not hospitalized. Local case counts are here: https://www.snohd.org/546/Local-Case-Counts.

Severe illness is not the only concern, Spitters said. Health officials hope to prevent all cases. Of the people who get sick and have symptoms, about two-thirds experience lingering illness that can include breathing difficulty, foggy headedness and malaise, months later.

"I know people are wondering how cases are rising while vaccination rates are also rising. But as we've been sharing for weeks, we are very clearly not out of the woods yet," Spitters said. "These recent cases are largely in settings where people let their guard down around friends, family and coworkers."

The motivator for preventing viral spread remains the same as when the pandemic began: hospital capacity is a top priority. If resources in urgent care are overtaken by COVID-19 patients, the attention and other needs for health care are spent when other emergencies occur. That means car wrecks, heart attacks and other immediate care would be hampered and ongoing care for other conditions is impacted as well. Phasing rollbacks can negatively impact business.

"We have made tremendous progress and we must keep our focus," Inslee said. As for the rollback for the counties announced April 12, he said, adding the rollback to Phase 2 was not punitive but a move to "save lives and protect public health."

Variants add another element of surprise but so far the data is not changing caution levels, although the B.1.1.7 variant has shown a 4% death rate instead of 2% with the first version of COVID-19. As of the April 14 report, 57 people had tested positive for the B.1.1.7 variant in a genome sequencing report issued weekly by the Department of Health. Six of eight variants were in Snohomish County (https://bit.ly/3dpb7zt).

Health officials have reported that COVID-19 vaccines have reportedly shown promise even against variants, but the data is still new.

Viral illness tends to have a 14-day window for infection. Once a big holiday comes and goes, health officials count the days on the calendar and wait to see what happened. The impact of whether caution was applied at Easter gatherings will be measurable around April 18.

The state keeps an eye on variants to watch for increased severity and transmissibility.

"Each (variant) has its challenges, but some of them do carry increased severity, but all of them appear to be a little bit more slippery and harder to control," Spitters said. "And that's the key thing, and why really now is not a good time to be having gatherings or letting the masks off."

Inslee encouraged a repeat of the standard pandemic advice: to stay vigilant. The tools to eventually bring the pandemic to an end are prevention and vaccination.

The return to normal – maskless and side by side in public places – is still months away. Spitters said 80% vaccination is estimated as necessary to interrupt transmission of COVID-19, which would lead to more restriction lifting. Snohomish County is at 23%. "Fully vaccinated" is two doses and a two-week wait for Moderna or Pfizer, one dose and a two-week wait for J&J. (The J&J vaccine is under review for safety concerns, per some media reports on April 13. Check back for updates.)

On April 15, everyone in Washington older than 16 years of age is eligible for COVID-19 vaccination. People ages 16 to 18 are limited to the Pfizer vaccine, but clinical trials are underway to free up more emergency use vaccine options.

With health officials awaiting the impact of Easter Sunday and continuing to see variants causing statistically low but increased danger and transmissibility, the climbing numbers remain a concern.

Whether Snohomish County will stay in Phase 3 is dependent on the same metrics that bumped three counties backwards.

The Healthy Washington criteria requires a set of milestones to move to more promising phases, or reverse to more restrictive ones. The next evaluation of counties is scheduled in three weeks, on May 3.

Failing both metrics for case counts and hospitalizations will bump a county down to the previous phase. The two-part failure supports business and balances the need for mental health support, from social interaction. Under the previous plan, failure in one metric would move a county backwards.