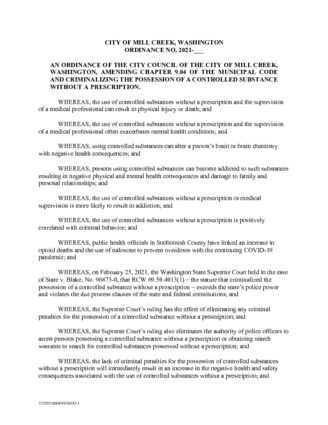 The Mill Creek City Council passed this "clean" version of an ordinance to address possession of a controlled substance in Mill Creek. It is cleaned of redlined items related to marijuana, which is legal on the state level but still aligned with heroin on the federal level.

Editor's Note: This is the first of a two-part series on the new drug law in Mill Creek.

A new law in Mill Creek is cracking down on possession of illegal drugs – and in a little over a week, the legislature may nix the whole thing.

Mill Creek's ordinance says it is unlawful for any person to "knowingly" possess a controlled substance unless obtained directly from a valid prescription. Any person who violates this section is guilty of a gross misdemeanor punishable by up to 364 days in jail and a $5,000 fine the ordinance states.

Cross into a city where the Blake Decision has not been addressed locally, and things get hazy.

"The patchwork of different policies from each district is confusing at best," said Stephanie Vignal, council member and Mayor Pro Tem in Mill Creek.

Controlled substances include heroin, methamphetamine, opioids and synthetically manufactured drugs such as fentanyl. Fentanyl is a highly concentrated opiate originally created to treat cancer-related pain, according to the DEA. Federally, the list of narcotics managed by law enforcement includes marijuana. But the drug was spared, due to its mostly legal status in Washington state.

Mill Creek code to address the possession within city limits was passed April 13 in a 4-1 vote with Vignal the only "no" vote, and councilmembers John Steckler and Benjamin Briles abstaining.

"In this case, it sounds like it's going to go into effect about two days before the end of the legislative session," Briles said.

Mayor and council member Brian Holtzclaw said he struggled with whether or not to pass the ordinance with the state fix possible soon.

"I was concerned if we did something it would be inconsistent with what the state would do," Holtzclaw said.

The implementation of a city law creates a training need, for law enforcement.

Asked about the challenge of scheduling a training for police officers before the new city ordinance was implemented, Steckler told The Beacon, "they won't have time."

The supreme court ruling pushes simple possession into a legalized category, temporarily. The fix for cities and possibly the state, if they hurry, is the word "knowingly." Holtzclaw was surprised the state had not already done the same: create a simple fix.

Due to the "not my pants" defense, the unwitting possessor of a small amount of illegal drugs is not required to prove knowledge of that possession.

The court ruled that accusing a suspect of "simple possession without proving intent was a violation of due process," said Grant Degginger, Mill Creek's City Attorney.

The state legislature has several laws under consideration to address the enforcement gap left by The Blake Decision. One bill returns simple possession to a Class C felony, by adding the word "knowingly" for possession to comply with the change issued by Blake.

Another makes room for personal use and gives law enforcement leeway for treatment-referrals.

Rep. John Lovick (D-Mill Creek) described the Blake gap as "a complicated problem." He told The Beacon talks were in process, and the move to get it right was a motivator. 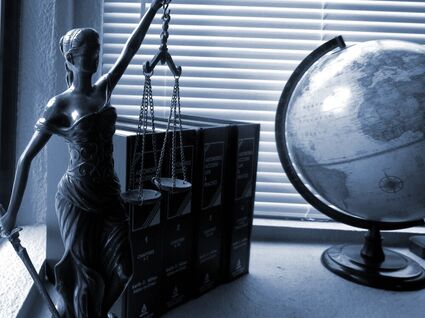 "We want to be thoughtful about this," he told The Beacon. Lovick served as a Washington State Trooper for more than three decades.

Vignal spoke in favor of waiting for that process to play out, before the City acted.

"I'm not here to make a headline," she said at the council meeting, before issuing the only "no" vote.

Her concern balanced public safety with lawmaking. She mentioned running Mill Creek streets in the early mornings, in the dark, and being closely connected to safety in her city.

"I feel like council needs to take the time to craft sound policy, and we can't do that without all the information," she said, referring to the upcoming law likely to be passed by the state.

Next week: What does the Mill Creek ordinance do to marijuana in the city?