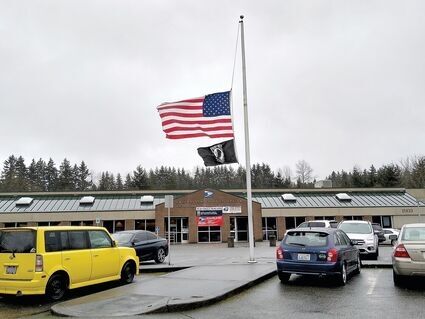 This half-staff flag at the Mill Creek post office Jan. 12 is to honor two fallen officers, in D.C. The flag status was at the direction of Gov. Jay Inslee. The mid-January lowering was in response in honor of fallen US Capitol Police Officers. Another flag-lowering was issued in early April for the death of a Bainbridge Island officer.

Governor Inslee has ordered flags at half staff to mourn the death of Bainbridge Island Police Officer Kurt Enget, 49.

All government agencies, citizens and businesses are encouraged to join the recognition, according to a news release from Gov. Jay Inslee's office. It applies thorughout Washington state. Flags should remain at half-staff until close of business or sunset on Saturday, April 10, or first thing Monday morning, April 12.

A memorial service for Enget is in Poulsbo on April 10.

Flag-lowering orders are averaging more than one per month, since 2021 started. According to USA.gov,...