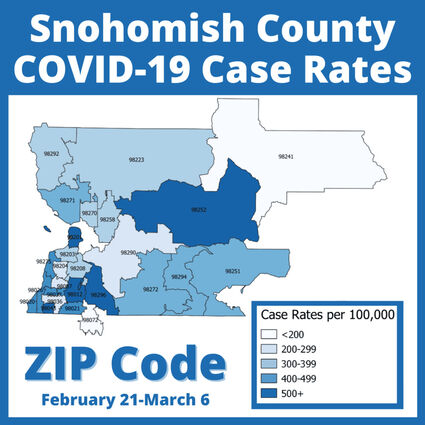 Cautious optimism is the tone as the mutating virus is reined in by vaccination and prevention, and businesses and schools begin to re-open.

As metrics, Somers pointed to more visitors to long-term care and fewer visitors to critical care in the county. He spoke to reporters in a March 23 Joint Information Commission meeting, a weekly update from the county and the Snohomish County Health District that grants access to front-line officials during the pandemic.

"We're not going to be able to enjoy (the) regular rhythms of life for some time, but we are making progress, and I think everybody can sense that," Somers said.

Data is feeding that sense. In Snohomish County as of March 13, cases came down from 70 per 100,000 for the two-week rolling count followed by a slight uptick of 72 per 100,000 the following count, said Dr. Chris Spitters, health officer for the Snohomish Health District.

"If we don't keep our protective measures in place, we could easily go back up into another wave," Somers said, "such as they're seeing, and I think over 21 other states."

The county has fully vaccinated 15% of the population as of health district data through March 16.

Bi-weekly case information for the rolling two-week count is changing to a monthly report, Spitters said.

"If something occurs between a report that has disease control significance for the community, we'll certainly bring it up and let you all know," Spitters said.

As vaccination continues, opportunities for public gatherings are increasing. The county moved into Phase 3 on Monday, March 22, freeing up restaurants to offer dining at a 50% capacity, a level some have told The Beacon in past interviews is a minimum level for it to keep them afloat.

Sports can take spectators, but some caution is needed in that realm.

Variants are circulating in Washington state with at least one located in Snohomish County. In COVID-19, a still-new virus, the treatments are still limited and considered experimental, and data is still being collected on long-term impact of those sickened so far.

Spitters said prevention is not just intended as a way to prevent death for those with severe illness, but to prevent the virus at all, as people wait for vaccination. He said some who have partially recovered from COVID-19 are still suffering.

"We see data coming out about people who, three, six months after having recovered still have difficulty breathing, short of breath going up the stairs, difficulty concentrating," he said. "We not only want to prevent the hospitalizations and deaths, but even just the cases – because of the impact they have on individuals down the line."

Snohomish County has at least one mutation to COVID-19, revealed through genome sequencing that occurs on approximately 5% of positive tests. It is considered a "variant of concern" by the Department of Health.

The B.1.1.7 variant was announced in late January, in the county. Two more variants were announced in King County but not yet announced in Snohomish County. Two in King County are the P1 and B.1.351 variants, according to a recent DOH report on variants. Vaccines still seem to prevent the risk of death and hospitalization, but the variants are a concern due to effectiveness of vaccines to create immunity from them. More data is needed. Researchers are beginning to talk about "vaccine 2.0" for COVID-19, according to STAT News.

Asked if high-risk residents should take any additional precautions due to variants, Spitters answered with a pep talk that meandered into sports metaphor.

"We've now been through this several times, we know why and how it happens. And so it's really in our hands," he said. "It's hard to predict what the final score is going to be, looking at the scoreboard at halftime, so to speak, but you know things are looking good and the other team is catching up, so to speak, so I'd say it's time for us to really double down on all those efforts to at least keep things level and try to push them down further."