It wasn't a doozy | Darn Wright 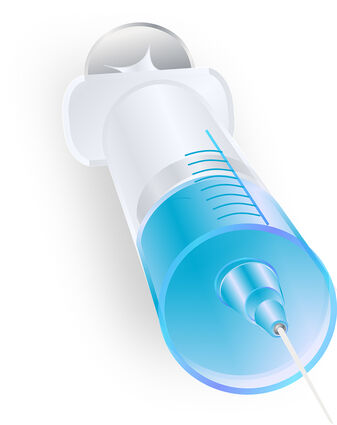 "It's a humdinger! And you better have lot of 7UP, sports drinks, clear soup broth, popsicles, Jell-O, and several barf bags strategically located throughout your house."

After my first Moderna COVID-19 inoculation and during the waiting period for shot number two, those friendly words of advice kept ringing in my ears.

After our first dose, Karen and I were advised our next one would be due by Feb. 19. But when Feb. 19 came and went and no word about our next appointment, we became very concerned about when would that doozy day come? This worrying came to an end on Feb. 23 when a neighbor texted to tell us to immediately go online and sign up for second-shot time at Monroe Evergreen Fairgrounds. And heeding to that advice, Karen did so and in no time at all we were both signed up for a 1:15 p.m., Feb. 26 appointment.

The last go-around had us in the car waiting line for 40 minutes, so assuming this was going to be the case again we were mentally ready for the wait. But, what a surprise, and at the same time a disappointment, to find our car was number three in line. When I previously noted "disappointment" this came about because after checking-in, a volunteer told us they were disappointed over the lack of turn-out, since they had been expecting "hordes" of people by this time.

The next step was to hand in medical forms, and with a quick review we were heading for our shots. Pleasantly, when we were through, our lengthiest waiting-time was spent parked in the 15-minute waiting space to make sure neither one of us had a negative reaction to the booster. My respect goes out to those many volunteers and professionals who ran this well-oiled system.

Within minutes after my dinner of a hamburger, fries and a Coke, I felt sleepy so I went to bed. But just to be awakened by our cuckoo clock bird, advising me it was 2 a.m. Coming out of that sleepy state, I began to feel a little – and I mean "a little" – warmness at the hypodermic injection site. But what had me massaging my muscles was the pain which was being generated around my left shoulder and my left lower leg. As those concerns settled down, I started to feel nauseated and my eyes clouded with salt water. Yet, even with those symptoms I found myself smiling since my body's fight against this assaulting virus was beginning to work. And with that pleasant thought I went back to sleep; however around 3 a.m. I woke to find I was using my fingernails to claw at those irritating itches, which were flowing from my neck, upper back and left rib areas.

Getting some relief from my fangs scrapping deep into my itches, I was able to get to sleep again. In the "real morning," around 10 a.m., even though they were fighting me to keep them closed, I finally won the battle and opened my eyes. The next big step for me was when I eventually compelled myself to get out of bed. I felt weak and behind my right eye I felt like it was swelling up and it started to water.

Around 1 p.m. my eyes were not wanting to stay open any longer so I let them win by giving them a few hours of shut-eye. When I come back to Earth I felt weak, my mouth was dry, and my motivation had gone way, way South on me. So I just let my body take control over my mind and became a large limp lump in my large rustic-colored Lazy (appropriately labeled) Boy chair. My mind did not like it that I had let my body take over, so it gave me a chastising self-talk to get my body up and do something.

I have to admit my doomsday friends were right about me having an active rumbling tummy. I didn't want to eat anything for those first two days. On day three great changes took place. No itching. My eyes were no longer watering. My tummy was rumbling for me to feed it. I was no longer chronically tired and my normal daily motivation was back.

Darn right, that doomsday did not happen but what is happening I am now heading for a more than 90% state of being protected from those microscopic body snatchers.