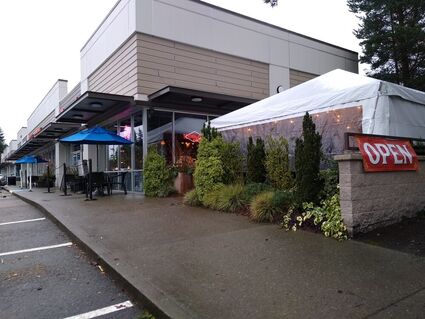 McMenamin's in the Gateway district of Mill Creek, the city's northern edge, has weathered the entire pandemic by figuring out ways to make customers comfortable. Management says the supportive customer base has kept them going.

McMenamin's and Diamond Knot are accustomed to a beer-and-burgers crowd. Sage & Cinder caters to a craft-cocktail-vegan crowd.

But the three restaurants have something in common – the ability to pivot.

Restaurants are again allowed to offer indoor dining at 25% capacity, as of Feb. 1, when the county moved into Phase 2. State restrictions were lifted due to an improvement in COVID-19 metrics in the Puget Sound area, which includes Snohomish County.

McMenamin's was doing relatively well even before the restriction-lift, as they pushed to adhere to state rules.

Nathan Reynolds, manager at McMenamin's in the Gateway district at Mill Creek's northern edge near 128th Street, said community support has kept them in business.

The patio covered with a canvas tent is onsite for people who want a seated dining experience. The outdoor heat source is propane, which is not the go-to for tent-heating in Mill Creek proper, but McMenamin's sits on the outskirts of the city. Snohomish County worked with the restaurant to assure fire codes were being addressed. The heat is piped into the tent: if propane tanks are placed inside outdoor tents, that would violate fire codes. Any heating source in an outdoor tent has to be electric.

Reynolds said if he has any advice to give other restaurant owners, it is to make an outdoor space for customers as a guard against more pivots. The restaurant stayed open through every change since the worldwide pandemic was announced in March.

McMenamin's has a strong presence in the Mill Creek area, with the Gateway pub as well as one called "The Anderson School" in Bothell, at 18607 Bothell Way NE.

"We've had a lot of support from the community around here, and we've managed to stay relatively busy," Reynolds said.

The pandemic did come with unpleasant impacts. Some layoffs occurred early on, Reynolds said, but "those of us that are here are busy, more often than not, which has been really nice."

Reynolds said they are doing a lot of take-out and delivery, and the outdoor tables turn over at a good pace from Friday to Sunday. The chain business started in Oregon, and Reynolds said Mill Creek area customers have been taken by it, over time.

"We're managing to make it work," he said of the pub that sits at the northernmost edges of Mill Creek. "We've obviously kept the doors open, and, you know what? We're doing OK. It's a little tough as you would imagine, but we're here, we're OK."

Andy Eason, Diamond Knot President and CEO, said that the timing of the state's decision on indoor dining was good. He noted the COVID-19 cases are going down. The Mukilteo brewery and alehouse opened its doors for indoor dining on Monday.

Diamond Knot has a large enough dining area to spread people out.

"We're able to provide plenty of space to socially distance," Eason said. "Our customer base in Mukilteo is wonderful. They want to see us succeed."

Eason added that if restaurants are given safety guidelines, they will follow them.

"If you give us guidelines to open, we're going to do a good job," he said. "Let us open."

Sage & Cinder, also in Mukilteo, was temporarily closed with plans on taking reservations for Valentine's Day weekend, for a special menu. Owner and chef Cynthia Hesselwood is aware she can offer indoor dining, but will not be doing that yet.

"We're a very small restaurant," Hesselwood said, with a 600-square-foot dining space. She said their re-opening midway through February will be for outdoor and takeout options only. They have constructed a cover over their deck to keep people comfortable. She anticipates the clientele will be open to the continued precautions.

"Vegan customers tend to be quite health conscious," she said.

The vegan restaurant is known for craft cocktails that allow an elegant sip without any missteps from a meat-free, dairy-free vegan diet. They make their own purees, Hesselwood said, with 100% vegan and locally sourced ingredients.

One signature dish, she said, is charcuterie, a menu item often found in Italian restaurants as a platter of cured meats and

creamy cheeses. The all vegan entrée of specialized salamie and cheese on the Sage & Cinder plate would make a pulmonologist breathe a sigh of relief. And, "of course, our vegan macaroni and cheese" is very popular, she said.

The small restaurant has a niche following, and the outdoor dining with pickup is part of that, even though indoor dining will be allowed.

The added caution is for the economic health of the business as well: with a staff of only four, it's difficult to operate with anyone sick.

The pandemic has led to a full closure for her site, as they prepare outdoor seating options and adapt to the changes imposed by pandemic times.

"Everyone's had to pivot a bit, for sure," she said of the experiences running a business over the past year.

"We wanted to put a cover on our deck from the beginning" of the pandemic, she said. Now that is nearing completion.

Phase 2 restrictions allow for indoor seating at 25% capacity, starting on Feb. 1. They won't be taking part.

"We don't really feel comfortable for inside dining, she said.

In contrast, some say indoor dining is a must, and that less than 50% just is not worth it.

Johanna Limberopoulos, one of three owners of The Rusty Pelican in Mill Creek, said the repeated pivots have been upending and expensive.

"We – as restaurants – just go above and beyond the safety for our staff and our guests," she said.

The repeated closures have caused a lot of pressure and loss. Each time a restaurant closes, food will spoil and has to be dealt with, she said, and those losses are felt. She said her business was down 90 to 95% during the full shutdown, early in the pandemic.

Being open at 50% was manageable, but 25% capacity creates a need to reduce hours, in order to pay employees. Covering the lease with that level of business is a challenge as well, she said.

"It's heartbreaking and discouraging," she said of the repeated changes to deal with COVID-19.

Grants have helped, but they're not enough to keep the business thriving.

Asked if she thought they could stay open through the pandemic, she said, "We hope so. That's all we can do."

She said she has witnessed some larger businesses not complying with the rules.

The push to open to a greater capacity comes from some in the business community, as well as some customers. 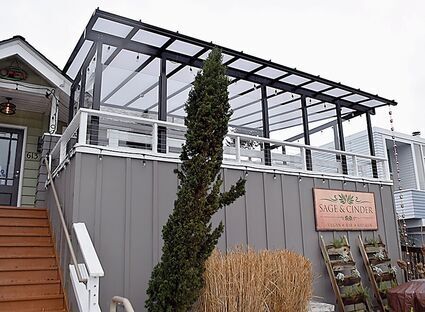 Sage & Cinder in Mukilteo has a cover over its deck for outdoor dining. The small vegan restaurant is famous for custom cocktails with all vegan ingredients. It plans to stay closed for a while longer, although the Phase 2 restriction-lift allows indoor dining at 25%.

The Washington Hospitality Association conducted an extensive study of business impact from COVID-19 in an effort to plan for 35% of lost revenue in their budget, said Jaque Coe, communications manager for the agency. In a count of businesses from March to September, 2020, WHA recorded 258 restaurants in Washington state permanently closed as a result of the pandemic, Coe said.

The WHA polled nearly 800 adults and said 75% of the public supports reopening restaurants. Its management argues that increased capacities for restaurants can actually prevent a spike in infection rates.

"When indoor dining was shut down in November, we warned the governor's office that this could drive cases up if people moved gatherings from highly regulated restaurants to private homes without safety precautions. Sadly, we were right," said Anthony Anton, President and CEO of the Washington Hospitality Association.

Limberopoulos said The Rusty Pelican was able to make it all work with the rules for indoor dining at 50% capacity.

"We were fine at 50% and were very strict with the masks," she said. "We were doing everything we were supposed to do and (restaurants) still got shut down."