Mill Creek officers trained for civil disturbance assignments, in the past 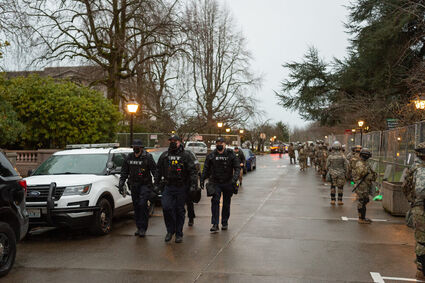 Eight agencies across the state were dispatched to protect the Capitol for the start of the legislative session.

Hundreds of law enforcement were deployed to the state Capitol, to safely usher in the start of the Legislative Session.

Defense of the Capitol in Washington state is shown in images that were provided by the Washington State Patrol. Photos were taken from behind the fencing at the Capitol Campus, the past week, the WSP reported.

The Beacon issued a question in a press brie ng this week, inquiring about the number of law enforcement present at the state Capitol. The count was requested as a comparator to the U.S. Capitol Jan. 6 where law enforcement appeared to be a minimal presence during the arrival of protestors.

The Washington state count was unavailable due to tactical reasons.

Loftis said all eight of the geographic districts across the state were represented.

The WSP spent $1.8 million including overtime and regular pay. An additional $100,707 was paid out as of Jan. 19, Loftis said, for food, supplies, equipment and lodging. That funding does not include US National Guard costs. The operational drawdown began on Jan. 22 but not all costs were tallied at that point, including communications.

Mill Creek Police was, at one time, trained to assist in protection such as the assignments in Olympia.

"To my knowledge we received no requests to assist with security at the state capitol. Currently we have no officers who are equipped or engaged in ongoing civil disturbance training. Equipment and training are essential before we could reasonably deploy in that type of capacity," said Mill Creek Police Corporal and Public Information Officer, Ian Durkee. "Years ago, we participated in the Snohomish County Allied Law Enforcement Response Team (ALERT), the county’s regional civil disturbance response team. Due to several factors, Mill Creek Police have no officers who are currently part of that team. While we still have some equipment, it is fairly old and outdated. There are at least four officers, including myself, who were part of the ALERT team in the past."

The website for Bothell Police Department lists training through ALERT.

Editor's comment: A past Mill Creek Beacon article mentioned a request to the Washington State Patrol regarding how many law enforcement were dispatched to the state Capitol: https://bit.ly/39qQWPC. That article requested response from local leaders on the rioting at the US Capitol Jan. 6.