Defense of state Capitol in photos 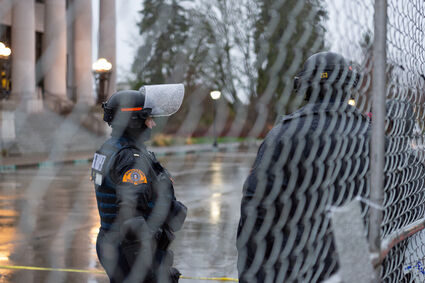 Hundreds of law enforcement were deployed to the state Capitol, to safely usher in the start of the Legislative Session.

Defense of the Capitol in Washington state is shown in images that were provided by the Washington State Patrol. Photos were taken from behind the fencing at the Capitol Campus, the past week, the WSP reported.

The Beacon issued a question in a press briefing this week, inquiring about the number of law enforcement present at the state Capitol. The count was requested as a comparator to the U.S. Capitol Jan. 6 where law enforcement appeared to be a minimal presence during the arrival of protestors.

The Washington state count was unavailable due to tactical reasons.

Loftis said all eight of the geographic districts across the state were represented. State funding included regular time, overtime, food, supplies, equipment and lodging, the WSP reported. The WSP spent $ 1,608,157 as of Jan. 20, Loftis said.

Mill Creek Police are often a support for local incidents near the city, but were not onsite in Olympia. 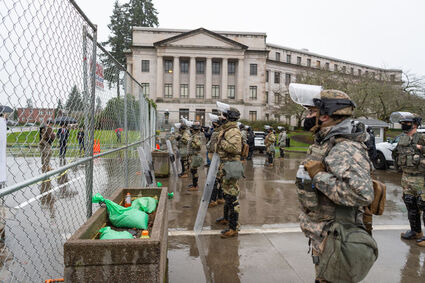 "To my knowledge we received no requests to assist with security at the state Capitol," said Ian Durkee, corporal and public information officer for the department. "Currently we have no officers who are equipped or engaged in ongoing civil disturbance training. Equipment and training are essential before we could reasonably deploy in that type of capacity. Years ago, we participated in the Snohomish County Allied Law Enforcement Response Team (ALERT), the county’s regional civil disturbance response team. Due to several factors, Mill Creek Police have no officers who are currently part of that team. While we still have some equipment, it is fairly old and outdated. There are at least four officers, including myself, who were part of the ALERT team in the past."

Nearby, the Bothell Police Department is actively involved in ALERT. "The team consists of highly trained and fully equipped police officers from local law enforcement agencies. They are prepared to deploy to situations involving large crowds, First Amendment activities, civil unrest, and other planned protests."