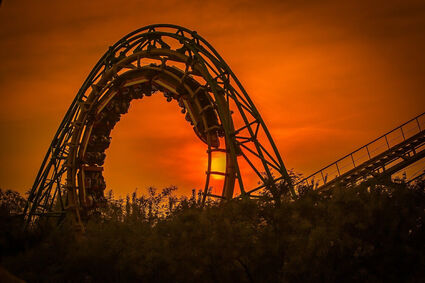 Who likes a roller coaster as much as I do?

Strapped in tightly by a three-point restraint to a plastic seat, looking about anxiously from several stories high, anticipating (and underestimating) the feel of ups and downs. The exhilaration from the height and speed and manageable fear. The belt is just loose enough to allow unsettling slips from side to side, front to back, even just barely off of the seat, while also tight and well-fastened enough to know you are unable to disengage yourself.

Regardless of design, a well-built roller coaster has cars affixed to tracks and follows some combination of ascents, descents, and perhaps a loop or two. Most importantly, as you first feel the roller coaster pull forward, you can see the exit on the other side, understanding that after a few short minutes, you will be back where you started from and the wild ride will be over.

The United States has been on a four-year roller coaster ride.

In 2017, the uncertainty and nervousness with a new administration maintained familiar guardrails, the norms and mores of our society and its dependable institutions, with requisite expectations attached. Over time, though, the growing exploitation of or intolerance for the norms and mores of the United States led to a remarkably rapid impact to our democratic institutions. Suddenly, the coaster ride seemed to have no end.

The term "mores" (mȯr-āz) was first used in the late 1800s by a Yale professor and the first official sociologist, William Sumner, a man who may not have been so bothered by our recent amusement park ride. The concept of mores (customs or behavior widely observed within a particular society or culture) expands on the theory of norms (accepted codes of conduct).

Sumner believed America had specific norms critical to our existence as a successful country, and although he did not believe in American exceptionalism, he felt America had the potential to create more individual victors in the ongoing process of social Darwinism. He saw the promise of America in our culture of competitiveness, a society based on simple concepts of winners and losers. He was a rabid anti-imperialist (trade with other countries but take little interest in international affairs) and was not a fan of governmental institutions. He coined the term "forgotten man" in reference to a middle class victimized by a government allowed to interfere in lassaiz-faire economics.

Ironically, Sumner did not compete much himself. He avoided being drafted in the Civil War by paying a substitute to fight for him and used his father's money to travel and study in Europe during the war. Sumner had one job throughout his career and grew to be an extremely popular professor because of his audacious statements, garnering much media attention and overflowing classrooms. His opinionated and "acidic" style outraged most but delighted his supporters, often putting him at odds with university administration and other academics.

Sumner attributed his development of the concept of mores to his father, a man who he said had "the best possible" habits in life and perspectives on politics and economics. Early in Sumner's career, he said that he accepted that others had valid "views and opinions" different from his father's, but as Sumner became more well-known, he publicly stated he no longer accepted that other's had acceptable views.

Even the originator of the idea that a society benefits from following a set of widely observed customs or behavior fell prey to his own ego after enough people loudly declared that he could judge which customs and behavior apply. In 1883, as construction began on the first roller coaster in the United States, Sumner wrote remarkable words for an academic, or even just a person who wanted to be taken seriously, "I have not troubled myself to keep or to throw off scientific or professional dignity."

May we all enjoy the unpredictability of an actual roller coaster (with its government-mandated safety protocols) but remember that our institutions of democracy cannot monitor or protect themselves. It is us, the people, who maintain them, sustain them, and strengthen or weaken them.