The one about the parking lot 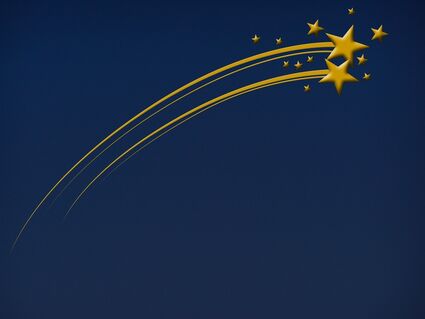 I was standing in a parking lot last week, a dreary December afternoon, cold and wet, when I got the text message from my wife.

I felt the phone buzz in my coat pocket as I chatted with the grocery store employee who had brought out my curbside order. I had to get out of the car and into the cold because there's no button on the dashboard to open the trunk from the inside.

If I'm being completely honest, it's possible there's a button and I just don't know where it is.

But these kinds of encounters are usually the only time I socialize in a real way, and I didn't mind the lousy weather for a brief conversation with a three-dimensional human being, even muffled by masks. We eventually said goodbye and I got back in the car, and that's when I looked at the text.

I sat there for a few minutes, re-reading the message. It felt like a moment fraught with danger, although this was all pretend. It just seemed like one of those comic situations that probably rarely happen, a question from one partner to another, who has to quickly choose between giving an honest answer and faking a medical emergency.

"Do these jeans make me look fat?" would be the classic example, but there are plenty.

I've been watching Elizabeth Perkins in movies for over 30 years. She's a wonderful actor and a lovely woman, and I'd imagine that anyone would take comparison as a compliment.

And I suspected the truth, that someone had seen Ms. Perkins recently in something and thought she looked a little like my wife.

It just made me smile. I've been married to this woman for nearly 40 years. Few questions are fraught with anything now. If she were to ask me if some jeans made her look fat, I'd probably suggest that she was giving way too much responsibility to those jeans.

This is because I'm a funny guy who sometimes ends up sleeping in the den.

But I was sitting in a parking lot on a December day, thinking about how well I knew my wife, and that's when I realized I had a Christmas story.

I really need one this year. I've been writing about life in this pandemic for over nine months, and it's hard to find moments that transcend death and disease. You know. Christmas stories.

I was in another parking lot, 38 years ago. A woman I knew waved at me. I walked over and we talked. That's the story.

We'd met the previous spring, when we started working together. We began as colleagues, soon became friends, and by the end of the summer something else was going on. We weren't sure what.

We really weren't. We were in college, we had lots of life ahead, plenty of big decisions to make down the line, and both of us were involved in other romantic relationships. We acknowledged some feelings but kept our distance, unsure of everything and unwilling to disrupt the lives of others over momentary passion.

And then summer ended, and school started back up. We got busy, and then there was Thanksgiving and approaching finals. She was finishing up graduate school, and somehow we didn't run into each other for a few weeks. I had just dropped off a final paper at a professor's office, and was preparing to head off to spend the holidays with my parents.

Had we not had this little spontaneous encounter in the parking lot, it might have been well into January before I saw this woman again.

Things would have been different, then. One imagines, anyway. We would have moved on, our little infatuation a thing of the past.

Instead, we had a conversation that December day in the parking lot, ending up having dinner and spending most of the evening together. Seven months later, we were married and looking toward the northwest. Things seemed to work out.

All romances begin as potential ones. When it comes to the most important people in our lives, we can all recall the times before we met, and all the things that could have been different had it happened in a slightly different way. This is a game we play after the fact, just for fun and wonder.

But it was just so random, that meeting in the parking lot, a matter of timing. Another minute or two, and it wouldn't have happened. I have two grown children, a grandchild, and nearly four decades of memories that all rest on that timing. It started to feel a little like a small miracle.

They're the stories we've been telling each other at this time of year ever since Charles Dickens invented the form nearly two centuries ago. Stories about second chances. Stories about hope, and humanity at its finest. Stories about miracles that aren't supposed to happen. Stories about hearts that grow three sizes, and Christmases that come all the same.

When I got home, I told her that she looked a little like Annette Bening, or Mary-Louise Parker, and occasionally Meryl Streep, but not Elizabeth Perkins, not really. She shrugged, not a big deal.

"You look really good in those jeans," I added, but after all these years, she knows how I feel.