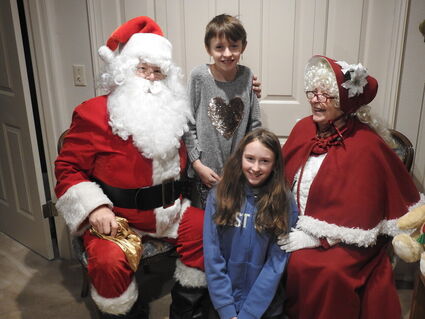 Santa and Mrs. Claus have been bringing joy to girls and boys of all ages this holiday season. The jolly couple, above, take a moment to visit with Charley, 9, and Katelyn, 12, when they dropped in on the Wright household last year.

During Karen's and my planning stages for our 2019 Christmas open house, I was telling Joop Dejone, a very close friend of mine, about our yearly holiday gala and asked him if he had any way to directly contact Santa. He noted that he did, because he and the Big Elf were very close, in fact they were like Siamese twins. Joop further noted he would guarantee he could swing it to have Mr. Claus attend our open house. Craftily, Joop added that his wife Annie could also arrange for Mrs. Claus to be at our Christmas festivities as well.

Karen and I were in a very festive mood when our Christmas open house was in full swing. We saw our friends enjoying our holiday dressed-up house. It seemed everyone was in wonderment over all our ornamental Christmas delights. One could overhear friends whispering; "Oh my gosh! Look at all the hundreds of Department 56 villages. Your house is so 'Christmasish' and it adds to our holiday spirit!"

Our guests' roaming began to settle down when some heard a large clatter. Our bedroom door opened, and to their wondering eyes BOTH Mr. Claus, with his large toy bag in hand, and Mrs. Claus appeared.

Long before our guests appeared, Santa wanted us to announce, through our invitations, that he would pass out gifts. His only request was a gift giver's bequest should be wrapped and labeled before Santa placed it into his large, furry, red bag. Ms. Claus would draw a package from the bag and call out the receiver's name. When a guest heard their name called, they would sit on Santa's lap and whisper to him other items "they just have to have" in order to enjoy their merriest of all Christmases.

After our merrymaking, I asked Joop if he was Santa and, if not, then how did he come about knowing the Clauses? He told me he had a strong desire to be the fat, loveable man, and began to describe his wish. "The idea of me being Santa and Annie being Mrs. Claus came about after we were asked to play the role of the Clauses at a retirement community. We accepted the Santa stand-in, but we really did not know the first thing about being a "Claus" except for shouting out the traditional HO, HO, HO!"

"What we found was a transformation that neither of us could have ever imagined – a jolly old guy and his wife putting smiles on everyone's faces. Young and old alike looked in awe; the older residents smiled, with thoughts of their memories of Christmases past, and the young ones anticipated sitting on Santa's lap to tell him about that one special Christmas gift they had to have. We helped people get into the holiday spirit, and they in turn motivated us from then forward to bring smiles and joy to all."

Joop became more animated as he brought me into his dream world. With a jolly large smile he said, "We developed a Santa and Mrs. Claus Facebook page, advertised through a website, but never dreamed we would get such overwhelming responses within hours of posting. Our December calendar filled up to the point we had to turn down requests."

Requests ranged from fund raisers, family gatherings, private parties, open house events, nursing homes, retirement communities, and even a local restaurant. We stayed busy the entire month, and did not hang up our suits until Christmas morning.

As alter egos for the real Clauses, our focus was to give back to our community, spread joy and smiles to young and old alike. What better way to do so than to become the doubles for the real North Pole dwellers? All we asked in return was that the requesters make a donation to their favorite charity."

"What a motivational story, Joop. But how did you become acquainted with the Big Guy?"

"Since he and I are 'one in body,' I just thought about our dream, and right after that Santa began whispering to me. The red-suited guy said he was humbled by Annie's and my desire to be the Clauses, and asked us to become one of his USA team members. And Chuck, the rest is history."

Darn right, let us follow Joop and Annie's advice and keep the Claus tradition alive by helping Mr. and Mrs. Claus spread the joyful spirit of Christmas across our lands!