Santa Claus is coming to Zoom 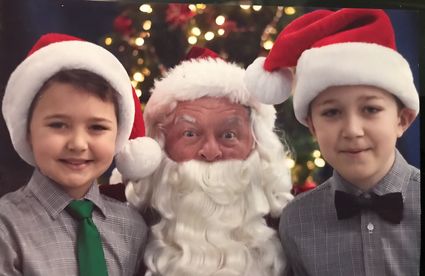 Left to right: Gabriel Horner at age 7 and Bradley Horner at age 10 of Snohomish sit in Santa's lap. The two were at last year's Kiwanis visit and the year before. This photo is from two years ago. The onsite events were at held at Mill Creek's Arena Sports, on Bothell Everett Highway. Due to COVID-19 restrictions this year, Kiwanis is live streaming Santa on Zoom "from the North Pole."

You better not pout, you better not cry -- the Mill Creek Kiwanis Club is telling you why: Santa Claus is coming to Zoom.

Reservations kicked off as the magical season rolled in on the first December, and Santa has room in his schedule and Zoom capacity – from the North Pole, of course – to take at least 140 visits.

"But I could make more spots available for more boys and girls because I, and I would never send a little boy or girl away from meeting with Santa Claus," said, well, Santa Claus. If he had a real name, he would have disclosed it, to be sure. This is the real deal. He livestreamed the interview with the Beacon from "the North Pole."

Mill Creek area children can have a 10-minute virtual visit with Santa by logging into a unique Zoom invite.

Each child's time with Santa is planned for time to share wants and desires for Christmas and the holiday season. Clement C. Moore's version of "The Night Before Christmas," autographed by Santa himself, will be a gift to each family. Each visit is paired with one copy of the book, and a recording of the visit itself.

Kiwanis is not charging for this Santa experience, but there is a suggested donation of $25 per visit. Zoom Santa is presented in partnership with the Mill Creek Chamber of Commerce and with the financial support of the City of Mill Creek C.A.R.E.S Act grant funding.

And, reindeer. Well, Rudolph will be there, of course. Out of view of the camera, but he does make an impression. Rudolph is a wily one.

"You take that outside, Rudolph," Santa scolded. "Ever since had his own TV show," Santa quipped.

Mark and Paige Horner of Snohomish took their sons to the Mill Creek Santa visit, two years in a row. The close proximity and the inviting nature of the event are what impressed them. Reflecting on past onsite Santa visits -- in Mill Creek, not the North Pole -- Mark Horner said Santa was surrounded by his elves, who were "enthusiastic to see us and our children, and to have them come up, and they were so engaged and warm."

Prior to that, they took their kids to Santa's Woodinville stop – that sleigh is fast. But the event was crowded with long lines. Mill Creek was a closer alternative.

This year, the Horners were not yet aware of the Zoom option, but may decide to go to the Mill Creek event as well. Mark Horner said he liked the option to support Kiwanis.

Santa will not be in Mill Creek this year, due to COVID-19. He is maintaining social distance all the way in the North Pole. Elwin said the event is funded by a CARES grant of about $7,450. The funds cover a "donation to the North Pole" plus books for the kids, and other hard costs, Elwin said.

In a Dec. 8 council meeting, Steckler gave a nod to Santa -- because they're tight. Steckler is in contact with Santa on a regular basis. In the city council meeting, he asked the council to share information about the opportunity for Santa meetings.

"I just wanted to let everybody know it was a fun thing," Steckler said. He witnessed Santa meeting with kids from a single-Mom home, where they lived on a very low income. The family "tried to keep it going, with her daughter home from school. Mother's got a bit of work. And it was just a very sweet."

He said one family had a mom and three of four children with COVID-19.

"So it's really pretty nice to see that they got a chance to get out and experience Santa Claus amidst all this nightmare of this pandemic," Steckler said. "And all that was possible because of the C.A.R.E.S. money that the city of Mill Creek made available to the nonprofit organizations."

Now, back to Santa: he does have a few aliases: St. Nick, Father Christmas.

He noticed the editor was "all grown up and a Mill Creek Editor now," and asked what she wanted for Christmas. She did respond, but cannot take payola, so will not be accepting a gift from Santa this year – due to the fact that she interviewed him for a story.

John Steckler, Mill Creek city councilmember, is supportive of the Santa visits. He said Santa is a friend. They are tight -- they stay in touch.

Steckler is a pretty enthusiastic guy himself, and some say the two – Santa and Steckler – never really end up in the same room together, in spite of their bond. Santa told councilman Steckler that when children get a chance to talk to him they "see the magic of Christmas, and Santa sees the beauty of the world through the eyes of a child."

Santa also said that "being able to do this on Zoom when everyone is staying quarantined is so exciting for Santa!"

How did Steckler know this about Santa?

"That's what Santa told me -- he's a friend of mine," Steckler said.

Santa visits can be scheduled here http://zoomsantamillcreek.org/. The visits are free and come with a book and a Zoom recording. A $25 suggested donation to Mill Creek Kiwanis is appreciated but not required. 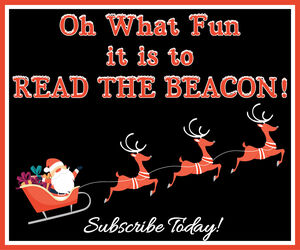