Surge is slowing, but more effort is needed 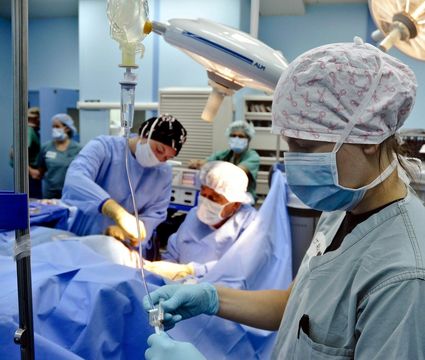 Hospitals are filling and officials are concerned about the ability for staffing and other resources to meet the demand of both COVID-19 and other emergency needs. They ask that people avoid in-person gatherings during the holidays to decrease spread, as all await a vaccine.

Health officials continue to plead for avoidance of gatherings during the holidays and continued compliance with COVID-19 restrictions in order to rein in a surge that threatens to overwhelm hospital resources.

Snohomish County's snapshot data is here: https://bit.ly/365TwJj. The county count is 13,569 cases since January and 275 deaths, as of Nov. 25. Currently 76 confirmed COVID patients are hospitalized, and another 9 people in the hospital are suspected of having the virus. A dozen are on ventilators.

"Historians have shared how the second and third waves of the influenza pandemic in 1918, 1919 -- now a century ago -- were far more severe when people grew tired of the mask mandates and restrictions, letting their guards down," said Dr. Chris Spitters, health officer for the Snohomish Health District. "They celebrated Thanksgiving and other holidays with relative abandon, and in the weeks and months that followed the cases piled up."

In Snohomish County, death rates have lowered to "over half a dozen a week" in the county, Spitters said, crediting an improved quality of care since spring, when treatment of the virus was new.

"We peaked at roughly 20 to 30 deaths a week in early April, and now we're at about one quarter of that," he said. "But I would expect that to increase to double or even triple in the, in the next week or two."

One reporter asked about the death of a child, outside of Snohomish County, from COVID-19.

"As this sad case shows," Spitters said, "even in the youngest and least vulnerable group, bad outcomes do occur."

He said in all age groups even the cases that do not require hospitalization can be a lengthy recovery for COVID-19. He is hearing reports that three months after recovery from the illness many still have difficulty breathing, chest pain, fatigue and some are "having difficulty facing and kind of getting, or getting through their day." He said that outcome is occurring "in all age groups. So, this is not a benign condition."

When asked about enforcement when people defy state restrictions, officials repeated the need for voluntary compliance. Visible and gross non-compliance in business settings has led to liquor licenses being pulled, officials said.

"But the vast majority of transmission is occurring in other settings, and we really are at the mercy of our collective will to limit those events from occurring," Spitters said. He said there is no meaningful enforcement on private homes. If people avoid gathering for the holidays, it will be their own will that guides them.

"We're entirely dependent on everybody thinking of the collective here to, to try to limit this, because there's no other way to do it with an eye on Thanksgiving," Spitters said.

Contact tracing shows that spread is mostly due to a breakdown in prevention measures with the people who are familiar with one another.

Hospital capacity is at greater risk in this surge, he said. During the previous spike, he said, other hospitals in the region could absorb acute care.

"That's not the case today," Spitters said. "Hospitals are filling up at rapid paces, and they're running out of staff to care, not just for COVID patients but for everything else."

Executive Dave Somers noted a number of vaccines looked promising. But patience will be needed. Once one or more vaccines gain FDA approval for emergency use, the wait to normalcy may be nine months out. First in line for vaccination will be healthcare workers and first responders, who are at highest risk for exposure, Spitters said. Next will be highly vulnerable populations such as those in nursing homes and other older people with risk factors for severe disease, and even they will wait until the supply expands.

Over the course of months, vaccination efforts will broaden to include critical infrastructure and public safety personnel, then older adults who have medical risk factors for severe disease.

Then comes the "general population, but this will take about six to nine months to unfold," Spitters said, putting the back-to-normal estimate at the "third or fourth quarter of next year."

And that is only the timeline if vaccines are approved by the FDA.

The reality of an uncertain and long wait circled back to a push for prevention efforts, including physical distancing, wearing face coverings when out of the home, and limiting social gatherings. 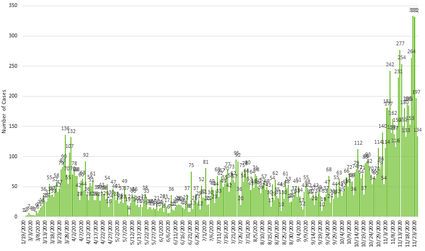 An uptick in travel shows that many are planning to celebrate with family, Spitters said. He warns that forging ahead with holiday plans will impact everyone's access to health care by triggering another spike, 14 days after those visiting experiences.

"We do have hope on the horizon," he said, for emergency use of one or more vaccines.

If the FDA concurs that vaccines are safe and effective, first doses could be shipped to the area by within mid to late December.

"We have warned that we were heading into a dire situation if immediate action was not taken," Spitters said that while restrictions were put in place to try to slow the building crisis in our healthcare system, parts of the county and state are "breaking record after record."