Consider the lilies of the pond | Chuck's World 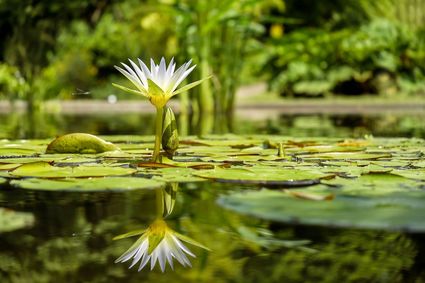 To be completely clear, I am uninterested in most things. I don't have passionate feelings one way or the other. I don't often talk or write about these things.

This is because you might like some of these things. I don't want you to feel insulted, or offended, or hurt. I want to avoid needlessly slamming something that I don't really care about, just to make a joke, and end up hurting your feelings.

I'm not referring to just readers of this column. I mean people in general.

This doesn't make me noble, or conscientious. It makes me a grownup, I think. Or at least my mother's son.

Let's take Halloween. Never been into it, not gonna change. I went trick-or-treating as a kid and then put away my childish things. I never once thought of Halloween as a "holiday," and in fact I used to push back on that idea until I realized I was wrong.

It's a holiday. Just a dumb one.

See? That just slipped out. I know quite a few people who do amazing things around Halloween that have nothing to do with asking strangers for candy. Costumes, decorations, elaborate parties. I know a couple of designers/engineers who have produced some spectacular (and truly scary, in a fun way) haunted houses and other spooky creations.

It's just not for me. I'd go to a costume party, I think, and probably have a great time, but really it barely crosses my radar. So I didn't miss it this year when it was essentially canceled, I guess. I saw some cute photos of kids. I'm not going to give anyone a hard time about enjoying Halloween.

There were a few jokes about bags of candy lying around the house, unopened, but those don't really work this year. No one would bat an eye if you had garbage bags filled with candy sitting in your kitchen, because everything's different with COVID.

You're now free to snack around the pandemic.

I'm very interested in this year's presidential election, but that's over now (not now, but by the time you read this). They're surely still counting votes and we may not know the results, but we've voted and it's not like I have a superpower of persuasion, anyway.

But what I'm really interested in today is this comment by Albert Bartlett, a prominent physics professor very concerned about unchecked population growth, who once said, "The greatest shortcoming of the human race is our inability to understand the exponential function."

My favorite example of exponential growth is an old one, about lily pads. There's a pond, and someone drops a lily pad in it. The next day there are two, the following day four, and so on. This is exponential growth, and lily pads will completely cover the pond in exactly 30 days.

So the question is asked: When will the pond be half covered?

And the answer is obvious, but usually not at first. This is why Bartlett fretted. This is why physicians and scientists are very worried about this pandemic.

"At this stage," French president Emmanuel Macron said the other day, referring to the current COVID-19 spike in Europe, "we know that whatever we do, nearly 9,000 patients will be in intensive care by mid-November, which is almost the entirety of French capacities."

Macron probably knows the answer to the lily pad question. If it takes 30 days for the pond to be fully covered, it will be half covered on the 29th day.

This is about to become a nightmare, and we shouldn't fool ourselves -- if anything, it'll be worse here. Meaning that COVID-19 isn't really the problem now; it's that your mild heart attack will go untreated, your wound infection, your broken ankle. Your cancer. It's always been math, which is why Macron is terrified. He can see the future.

And we can mitigate it by just being grownups.

You know the drill by now. Facial coverings in public. Good hygiene with lots of hand washing. And isolate as much as possible.

This isn't a hoax or political, or something you think we can compromise about so "both sides" feel better. There are no sides. It's a virus.

And if you think this is overblown because you and your friends don't know anyone who's been hospitalized or even diagnosed with COVID-19, we're back to math. There are 9 million diagnoses in a country of 330 million. It's not going to touch you until it does, and then it will be too late. The pond will be half covered.

Eventually we'll have a vaccine, which with luck will be at least partially effective. The apparent short period of immunity in recovered patients is concerning, but we're still learning.

But we need to cancel Thanksgiving. And Christmas.

You know what I mean. Skip the family gatherings this year, all of us. It's painful and counter to our social instincts, but I hear and see plans being made. I still don't have that superpower, so I'm just asking for a friend. A lot of friends.

Mask up. Isolate. Stay home, skip the holidays with the family and do it next year.

We can see the future from here, and turkey is not worth it.