Both announce on social media 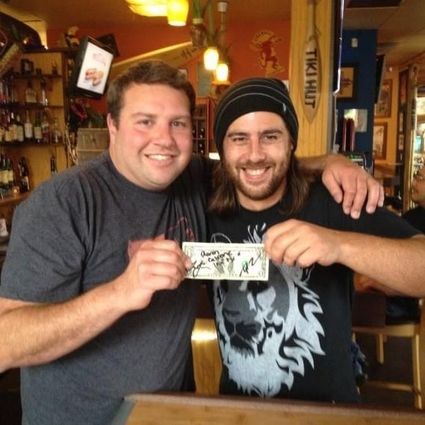 Twister Lime Pub is open again, after employees tested positive for COVID-19. Pictured here are the pub owners: Greg Johnston (left) and Tyler Nelson (right). The two stand together on their first day as bar owners, holding the first dollar earned together. Nelson died last year, and Johnston continues bar ownership on his own. Johnston chose to announce the COVID-19 related closure on social media and his website, even though not required to by the Snohomish County Health Department. He and owners of La Palmera both said they were motivated to warn local dining communities, to prioritize safety.

Two businesses in Mill Creek and one on Airport Road near Mukilteo went through the process of temporary closure after employees tested positive for COVID-19.

Two La Palmera employees tested positive for COVID-19, triggering closure of two sites: one at the Town Center location in Mill Creek at 15224 Main Street, and a second at the 11731 Airport Road in Everett.

"I just decided to close down the bar right away," Twisted Lime owner Greg Johnston told the Beacon. "We've been just devastated by this."

Both businesses posted on social media and websites and both are re-opened now: the motivation to announce widely was not required, but a choice of management, at each location.

Twisted Lime reopened Nov. 4 after quarantines, walk-throughs and sanitizing. Johnston said he and his staff were taking all recommended precautions as well as some that were above and beyond. Temperature checks were done daily, front-end employees wore masks, and kitchen staff wore both masks and gloves. Tables and condiments were sanitized in-between customers, he said.

Menus had QR codes to limit customer contact; some were covered in plexiglass, with paper menus available then discarded (available for the customers who were not clear on how to use the touch-free technology of QR codes). Johnston said hand sanitizing stations were all over the pub, and individually wrapped straws were offered to reduce germ spread. Tables were kept socially distant and outdoor tables remained open.

The news that their precautions were not enough was a shock.

"We were just blindsided," Johnston said.

In addition to a social media post, he put the COVID-19 closure information on the website at https://www.twistedlimepub.com.

Twisted Lime's current staff is made up of 15 people – a mix of servers, kitchen staff and bartenders. All were quarantined, Johnston said.

The restaurant did not close for the full shutdown in the spring, but instead did curbside service. Experts say outdoor space is lower risk for COVID transmission, and some diners still prefer to be outdoors, even in the cold.

"We wanted to make sure we had a positive experience for them to dine outside as well," Johnston said.

He said he heard of La Palmera shutting down as well.

"It doesn't make us feel any better but at least we're not the only ones who had to deal with this," Johnston said.

Johnston was sending daily updates to the Snohomish County Health District during the closure. The week after the quarantines, he was at home, waiting for information from employees.

The decision to tell everyone by posting on social media was a hard choice, but Johnston said the health of customers and employees had to come first. Closure was another step for safety, and because a small business only has so many resources it was also a given.

"We don't necessarily have a big staff where I can call in the B-squad, you know," he said.

Twisted Lime has not had a lengthy break from tough times. Johnston's best friend and co-owner Tyler Nelson died just over a year ago.

It was a dream for the two friends to open a pub together, and Johnston is running the business solo now.

"He was a really good guy. We miss him dearly," Johnston said. "He was my best friend, too, so it was like a double sting. He and I were inseparable, so it was kind of one of those things – this was our dream together," he said.

He said his best friend is "alive in spirit when you walk through the door of the Twisted Lime. He loved life, and people loved him."

In late October, he was quarantined. A walk through by the Health District was still up in the air on Oct. 25.

Johnston was ready to make changes, if needed.

"If they find something we could be doing better, we will absolutely incorporate that into our daily routine," Johnston said. But, the waiting was tough.

"All I want to do is be at the bar and be doing stuff, but the right thing to do is to be quarantining right now," he said Oct. 25. "We look forward to getting back when the time is right."

He said the choice to announce publicly drew in a lot of support from the community that gathers at the pub.

"Our thoughts and prayers are with everybody, and we appreciate all the support we've been getting online," Johnston said.

La Palmera's management learned of employees testing positive for COVID-19 as Twisted Lime's process was playing out. By Thursday morning the same week, an early morning call came in to La Palmera management. Employees were ill, and being tested for COVID-19, said Yuli Mendoza, who is part of the general management and administrative offices for the family business. Mill Creek and Everett locations saw cases at the same time, so the business leadership chose to shutter the third.

"We just decided to close the other location in South Lake Union," she said.

La Palmera worked with the health department to determine when to reopen. The South Lake Union site had no reports of COVID-positive employees, but the business closed as a precaution. It is re-opened now, with the other two sites. Everett reopened the Tuesday after the first closure, with the 35 employees cleared of COVID. Mill Creek's 43 employees were able to return shortly after, to the Town Center La Palmera.

The employees who tested positive were required to quarantine for 14 days, at minimum, Mendoza said. More time away was required, if symptoms persisted, she said. The restaurant learned that public disclosure was not required or even recommended, but they felt it was the best choice anyway.

"To be honest, we weren't scared about it. We knew that COVID is a reality. The numbers are going up in the last two weeks. We knew there would be concerned customers," she said. "It was more about wanting to be upfront and communicating."

She said they knew of restaurants that decided not to communicate about COVID-19 positive employees. She said the overwhelming response was appreciation, as some customers were able to inform elderly relatives, after visiting the restaurant.

The face-to-face unmasked contact is the key concern, she was told. The masked employees who are avoiding contact, and not talking to customers are a lesser risk she said she was told. She said she was advised to avoid disclosing publicly, but the health district said that's not the policy.

The district does not advise restaurants to avoid publicly disclosing on social media, said Heather Thomas, public and government affairs officer for the Snohomish Health District.

The business, like Twisted Lime, ran through the shutdown. During the full shutdown in the spring, takeout was offered from La Palmera restaurants.

With all sites reopened, La Palmera is ready to get back to business. During the temporary closure, they hired out a deep clean. They had their walk-through with the Health District, and did not get any new protocols that they were required to implement. But as an independent act, they did decide to add extra Plexiglas to heighten the guards around customers who are seated and dining.

"We're going to continue to be extra vigilant," she said.