COVID positive employees at both sites 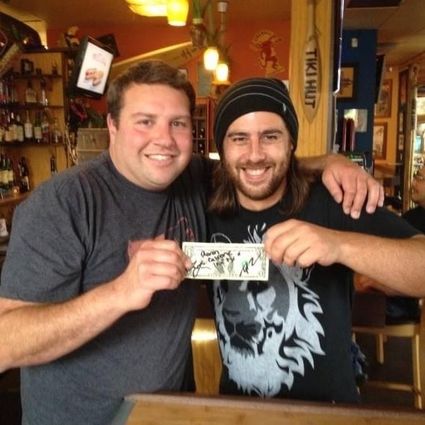 Twister Lime Pub is preparing to re-open after a COVID-19 related challenge that closed the doors temporarily. Pictured here are the pub owners: Greg Johnston (left) and Tyler Nelson (right) stand together on their first day as bar owners, holding the first dollar earned together. Nelson passed away last year of stomach cancer, and Johnston continues bar ownership on his own. Johnston chose to announce the COVID-19 related closure even though not required to, by the Health Department. He said the motivation was to prioritize safety.

Two businesses in Mill Creek and one on Airport Road near Mukilteo are temporarily closed due to COVID-19 precautions.

As of midday Oct. 22, two La Palmera employees had tested positive for COVID-19: one at the Town Center location in Mill Creek, located at 15224 Main Street, and a second employee at the 11731 Airport Road in Everett, an 11 minute drive from Mukilteo Speedway.

La Palmera was contacted for comment, but has not yet responded.

"We wish them a full and speedy recovery and are providing support," the La Palmera Facebook said.

"I just decided to close down the bar right away," Twisted Lime owner Greg Johnston told the Beacon. "We've been just devastated by this."

The pub was taking all recommended precautions as well as some that were above and beyond, he said. Temperature checks were done daily, front-end employees wore masks, and kitchen staff wore both masks and gloves. Tables and condiments were sanitized in-between customers, he said.

Menus had QR codes to limit customer contact, some were covered in plexiglass, and paper menus were available then discarded (for customers who were not clear on how to use the touch-free technology).

Johnston said they also had hand sanitizing stations all over the area, individually wrapped straws," and tables were kept socially distant.

The news that their precautions were not enough was a shock.

"We were just blindsided," Johnston said.

He put a sign on the door Wednesday Oct. 21 and went even further to announce the temporary closure, publicly disclosing the positive COVID tests on social media and the website at https://www.twistedlimepub.com.

Twisted Lime's current staff is made up of 15 people -- a mix of servers, kitchen staff and bartenders. All are currently quarantined, Johnston said.

The restaurant did not close for the full shutdown in the spring, but instead did curbside service. When restaurants were cleared to open for indoor dining, Johnston said they arranged tables to be socially distant and kept the patio open even in cooler weather, to keep guests comfortable. Experts say outdoor space is lower risk for COVID transmission, and some diners still preferred to be outdoors even in the cold.

"We wanted to make sure we had a positive experience for them to dine outside as well," Johnston said.

He said he heard of La Palmera shutting down as well.

"It doesn't make us feel any better but at least we're not the only ones who had to deal with this," Johnston said.

Palmera also announced publicly that their temporary closure was due to COVID.

Johnston sends an email to the Health Board daily with udpates. His staff is advised to quarantine, so they do not expect to open before Nov. 2.

"Now we're just playing the waiting game and hopefully we caught it before it spread too fast," Johnston said.

The decision to tell everyone by posting on social media was a hard choice, but Johnston said the health of customers and employees had to come first. Closure was another step for safety, and because a small business only has so many resources it was also a given.

"We don't necessarily have a big staff where I can call in the B-squad, you know," he said.

Twisted Lime has not had a lengthy break from tough times. Johnston's best friend and co-owner Tyler Nelson passed away just over a year ago from stomach cancer.

"He fought long and hard," he said.

It was a dream for the two friends to open a pub together, and Johnston is running the business solo now.

"He was a really good guy. We miss him dearly," Johnston said. "He was my best friend too so it was like a double sting. Him and I were inseparable, so it was kind of one of those things -- this was our dream together," he said.

He said his best friend is "alive in spirit when you walk through the door of theTwisted Lime. He loved life, and people loved him."

Johnston looks forward to seeing the pub reopens, as soon as it is safe to do so. Regarding how and when that will happen, he said it is up in the air. The Health Board will do a walk through and "if they find something we could be doing better, we will absolutely incorporate that into our daily routine."

Johnston said the waiting is tough.

"All I want to do is be at the bar and be doing stuff, but the right thing to do is to be quarantining right now," he said. "We look forward to getting back when the time is right."

Monday he hopes for a better understanding of what the Health Board expects, and when they can inspect.

"Our thoughts and prayers are with everybody, and we appreciate all the support we've been getting online," Johnston said.

Look for more news in the print edition of the Mill Creek Beacon, Nov. 6.