Plans are in the works to replace it 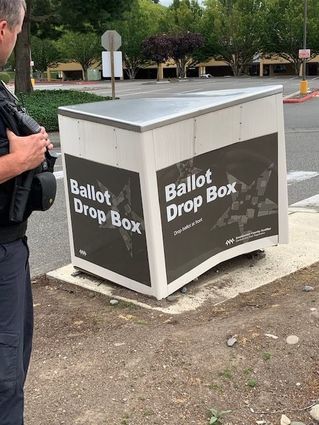 Mill Creek Police Officer Todd Bridgman views the damaged ballot box in front of the Mill Creek Post Office. The police responded to the incident and learned that the damage was accidental, when a semi truck had trouble navigating the roundabout.

Police say the ballot box at the Mill Creek Post Office was accidentally hit by a post office semi-truck, as the driver was trying to navigate a roundabout there.

Mill Creek Police Officer Todd Bridgman said after investigating the incident, it was clear that the damage was unintentional.

"We didn't issue any tickets or anything," Bridgman said. "It was an accident."

The box is a prized item for some local voters, with resident Glenda Teck saying she has used the ballot box over time.

"It was demolished, again," she said, recalling other times that the same ballot box has been hit.

Teck was part of the effort to get the box installed, back in October of 2018. She said this is the third time it has been damaged.

"It will be replaced before the election," Snohomish County Auditor Garth Fell told the Beacon, on Sept. 25. He said a new ballot box should be installed within the next two weeks, "before ballots go out on Oct. 15."

The roundabout where the ballot box is positioned in a troublesome spot, some say. The area is tight even for cars, and difficult to maneuver.

Some assumed vandalism when they saw the ballot box, which was crumpled around the same time as a USPS demonstration. Officer Bridgman said that if the ballot box had been vandalized, the consequences may have included malicious mischief.

"I was happy to see there was a police officer down there," Teck said.

Election officials are aware of the necessity for ballot boxes. Fell said the Mill Creek ballot box took in 17,000 ballots in the Aug. 4 primary. He said there are 30 ballot boxes in Snohomish County, and about half of County voters use ballot boxes to vote. Another option for Mill Creek voters is the ballot box in McCollum Park, in the park and ride lot, Fell said. Signage at the park leads to its location.

"It's a really important component when you have mail-in voting that people have access to a ballot box near their home," Teck said. "I just think it's a matter of convenience."

Teck also mentioned that people used to save postage by using a ballot box to vote, prior to the change to pre-paid postage that started in 2018, in Washington State.

All registered Washington State voters receive mail-in ballots. For a ballot to be counted, it must be post-marked on Election Day. Those not yet registered to vote can do so until Oct. 26, online. For more information, go to https://vote.gov/register/wa/