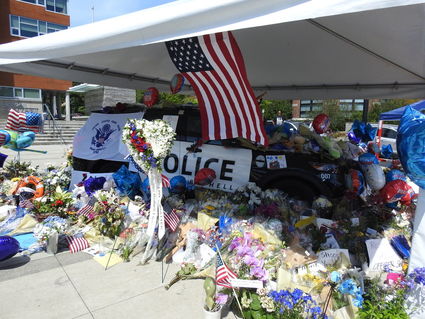 A memorial for fallen Bothell Police Officer, Jonathan Shoop. Shoop was caught in the crossfire during a traffic stop and fatally wounded by his partner's gun.

The bullet that killed a Bothell police officer after responding to a traffic stop came from his partner's gun, investigators said July 17.

According to investigators from Snohomish County Multiple Agency Response Team (SMART), Bothell Police Student Officer Jonathan Shoop was in the driver's seat and Field Training Officer Mustafa Kumcur was in the passenger seat when Henry Eugene Washington came to the drivers side of the police vehicle and fired two rounds. One bullet shattered the window, and one bullet hit Kumcur's gun and ricocheted, grazing him in the head. Both officers returned fire. Shoop was killed in the crossfire after being fatally shot in the head by Kumcur's gun, according to the SMART investigation report.

When other officers arrived, they found Shoop, deceased, and Kumcur, wounded, in the police vehicle which had rolled a few hundred yards before coming to s top against a tree. Kumcur was taken to the hospital for medical treatment and released. Shoop died at the scene.

The two officers had stopped Washington's black sedan at about 9:40 p.m. on westbound SR-522. After a short pursuit, Washington's vehicle struck a pedestrian on a scooter, injuring him, and crashed through the center median and stopped in the 10300 block of Woodinville Drive. Then Washington ran up to the police vehicle and the fatal gunfight followed.

After the gunfight, Washington fled on foot and climbed on top of a roof. He called a 911 call center in Kansas to tell his family that he'd shot and killed a police officer. He was found at about 3:40 a.m. wedged between two buildings after trying to exit a rooftop in the 1000 block of Main Street. Washington was taken into custody without incident. He has been charged with aggravated first degree murder, attempted murder first degree, and vehicular assault by the King County Prosecuting Attorney's Office.

The City of Bothell is split between Snohomish and King counties, and the incident occured about a mile south of the county line, so King County is handling the case.

During an interview with detectives, Washington admitted to driving the Pontiac, driving away from the traffic stop, hitting the pedestrian, and shooting at Officer Shoop. Officers recovered a handgun from Washington's pants.

There were no other occupants in the Pontiac.

Detectives with the Snohomish County Multiple Agency Response Team (SMART) are investigating a shooting incident after a traffic stop that left one officer dead and another injured in the King County portion of Bothell. The city also extends in Snohomish County.

At about 9:40 p.m., Bothell Police Department officers stopped a black sedan on westbound SR-522. After a short pursuit, the vehicle struck a pedestrian on a scooter, crashed through the center median and stopped in the 10300 block of Woodinville Drive.

Gunfire was exchanged, and it was reported that one person ran from the vehicle. As additional officers arrived, they found two Bothell police officers had been shot. One officer was deceased; he was later identified as 32-year-old Jonathan Shoop, who had been with the police for a year and previously served in the Coast Guard.

The second sustained non-life-threatening injuries and was taken to Harborview Medical Center in Seattle. He was released today, July 14.

The pedestrian was also taken to Harborview.

Bothell Police confirms that the man suspected of shooting the officers was apprehended at about 3:20 a.m. this morning after he was located hiding on the rooftop. He was arrested without incident. 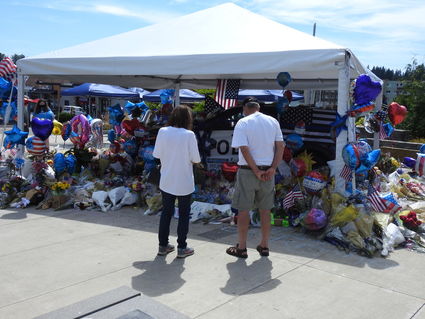 Follow-up information related to the officers will be handled by Capt. Mike Johnson of the Bothell Police Department at 425-487-5127.

The investigation is being conducted by the Snohomish County Multiple Agency Response Team (SMART). SMART is a team of investigators, evidence technicians, records specialist, and public information officers from various Snohomish County law enforcement agencies and Washington State Patrol, who respond to, and investigate, police use of force incidents.

There are civilian community members that also serve on SMART per the Law Enforcement Training and Community Safety Act (LETSCA). When the SMART investigation is complete, results will be forwarded to the Snohomish County Prosecutor's Office for review.