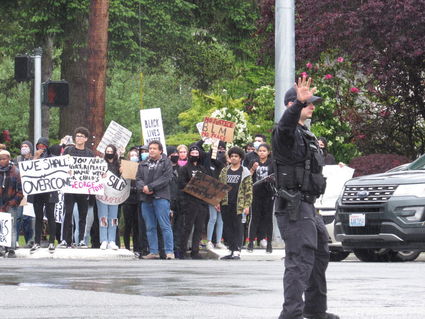 High school students organized a peaceful protest in Mill Creek on June 2 in response to the death of George Floyd.

About a hundred peaceful protestors, the vast majority of them young people, gathered at the intersection of Bothell-Everett Highway and 164th Street SE on Tuesday, June 2, to show their support for the Black Lives Matter movement and against the killing of George Floyd at the hands of white Minneapolis police officers.

The protest was led by high school students and word spread on social media. It hit a couple of the Mill Creek Facebook groups the day before, and multiple people expressed concern that Mill Creek's protest may devolve into violence and looting like those seen in Seattle an...